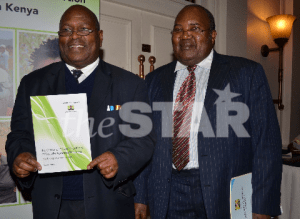 MORE than 465,000 induced abortions were procured last year countrywide, the government has said. According to a government report released yesterday, 43 per cent of births that were reported by the 2008-09 Kenya Demographic and Health Survey were “unwanted” or “mistimed”.

Rift Valley recorded the highest prevalence rate of reported abortions at 46,912, followed by Nyanza and Western combined, which had 45,027, while Eastern had the least cases at 12,169.

Central and Nairobi had 20,676 cases, while North Eastern and Coast reported 16,649 incidences. Speaking during the launch of the report at the Hilton Hotel in Nairobi, director of Medical Services Francis Kimani said there is need to increase contraceptives to address the unmet needs.

He called for enhanced accountability by health providers. He said enforced citizen charters and healthcare providers can reverse the trends of skyrocketing numbers that are leading to complications.

“Unsafe abortion has been recognised as a leading cause of maternal morbidity and mortality,” Kimani said. He said a recent study ranked unsafe sex as the leading contributor to disease.

According to the Incidence and Complications of Unsafe Abortions in Kenya report, more than 70 per cent of women seeking post abortion services are not using contraception.

The report was commissioned by the government and the African Population and Health Research Centre. Although most government facilities provide subsidised or free family planning services, the centres usually have a shortage of qualified healthcare givers.