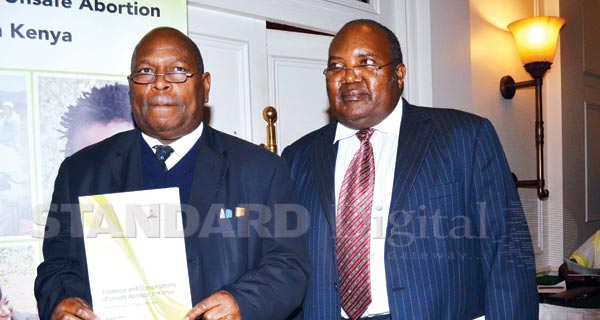 Director of Medical Services Dr Francis Kimani (left) and a member of the Medical Practitioners and Dentists Board Dr Samson Wanjala during the launch of the Abortion Report at a Nairobi hotel.

Nairobi, Kenya: An astonishing 465,000 unsafe abortions were procured by Kenyan women last year, according to a national survey released Wednesday.

More shocking for Kenyan families is data showing that majority of those seeking backstreet services were married women while girls as young as 10 were also captured in the survey data.

The report launched Wednesday showed that 64.4 per cent of married women or those living with their partners sought post-abortion care in health facilities while 27.8 per cent have never been married and 7.5 per cent were divorced.

It further revealed that among those seeking after-abortion care in health facilities, 16.5 per cent were girls aged between 10 and 19; 31.7 per cent were aged between 20 and 24 while the other half were over 25 years. The report released Wednesday by the Director of Medical Services Dr Francis Kimani says last year’s count was up from less than 300,000 a decade ago.

In December a Google report confirmed that the Internet search query “How to procure an abortion” was the most popular of all searches by Kenyans. The Google Zeitgeist 2012 report showed the number one trending search in the “how to” category was by Kenyans seeking information on how to abort.

The study carried out by the Ministry of Health, African Population and Health Research Center, Ipas, and Guttmacher Institute shows that induced abortions cut across all reproductive age groups, religions, social status and education even pulling in girls as young as 10.

“More shocking is the finding that among women aged 19 or younger who came to a health facility for post-abortion care, 45 per cent experienced severe complications,” said Kimani during the launch.