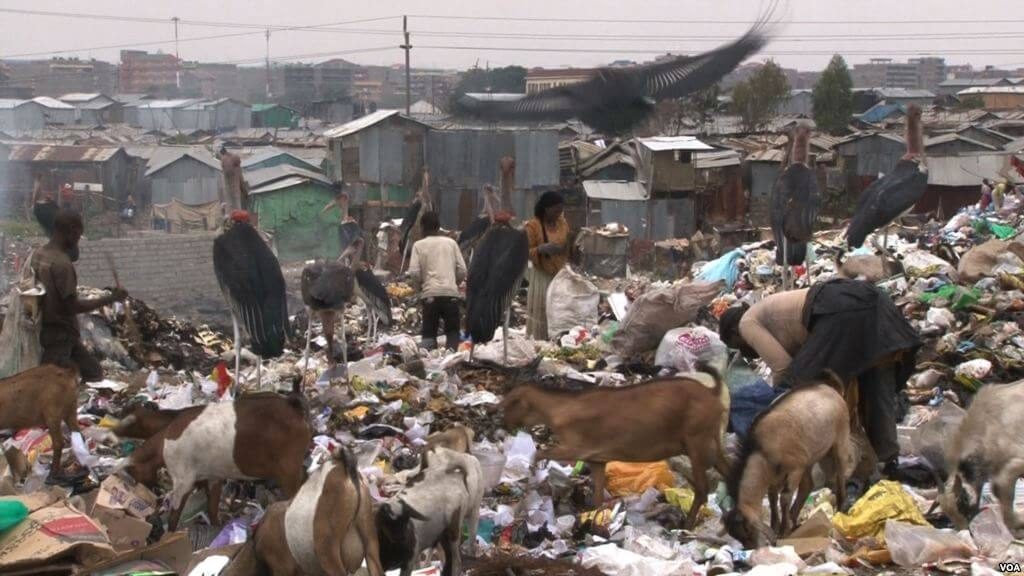 By Steve Baragona, Voice of America

The next superbug could emerge from the slums of the developing world, researchers warn.

Rapid, unplanned growth in many urban areas has people, livestock and wildlife living in close proximity and with inadequate sanitation. These are ideal conditions for microbes to evolve and spread.

So a major project is underway, designed to shed light on how microbes move through the slums of Nairobi and beyond.

It’s known as the Urban Zoo project. “Zoo” is short for zoonosis, the spread of diseases from animals to humans. From salmonella to swine flu, that’s how we get most of our diseases.

But “zoo” also suggests the menagerie of creatures found in Nairobi’s slums that could carry those diseases.

Fenced in by sheets of rusting corrugated metal in Nairobi’s Viwandani neighborhood, Joseph Mwai and his family share a couple thousand square feet with three cows, a handful of chickens, about a dozen goats and a small herd of pigs.

These are far from optimal conditions for raising livestock. But Mwai says he doesn’t have much of a choice.

“It’s important to me because I don’t have any job to do,” he said. “I make a living from them.”

A garbage dump smolders behind Mwai’s tiny homestead, across a stream polluted with raw sewage. People, goats and Marabou storks pick through the trash side by side, looking for anything useful or edible. Plastic bags are pulled from the heaps, rinsed in the contaminated river and resold.

It’s a rich environment for the spread of bacteria and other microbes.

The Urban Zoo project is watching one microbe in particular: E. coli.

Mostly harmless, E. coli usually leads a quiet life in the digestive tract of warmblooded animals, from humans to birds to mice.

But some strains cause disease. And it’s of special interest to researchers for two other reasons.

First, it can spread easily and widely, according to molecular biologist John Kiiru with the Kenya Medical Research Institute. He explained, “E. coli is able to survive in the environment and it can also be shared between humans and animals.”

And E. coli are exceptionally good at swapping genes with other microbes, including genes that transform harmless bacteria into dangerous germs, or that render them immune to antibiotics.

These genes “can actually be transferred to other organisms which could be pathogenic,” Kiiru said.

That’s not a hypothetical. Kiiru says his team has identified E. coli that are resistant to four antibiotics, then found that same resistance pattern spreading to another germ, salmonella.

“And when we sequenced and analyzed these resistances,” he said, “we found that the same block of resistance genes that we had found in E. coli were actually now in salmonella.”

Even more concerning: Cholera germs may have picked up those resistance genes as well. “What you end up creating is a superbug” that’s highly virulent and highly resistant, Kiiru said.

But scientists know very little about how any bacteria move through this complex environment.

So the Urban Zoo project is visiting 99 households across Nairobi, rich and poor, with livestock and without. They’re taking samples from people, their animals, and whatever wildlife they can find nearby (and catch): storks, mice, bats, et cetera. They’re sampling the ground around homes, yards and livestock pens with white paper booties.

The aim, says University of Liverpool veterinarian Judy Bettridge, is “to try and understand on a small scale how those bacteria are shared” among each household’s people, livestock and environment. “And then when we scale it up, are the bacteria here being shared with the household that’s 50 meters over there? Or 100 meters over there? So, how far can they actually spread?”

Once they find out, Kiiru says, the researchers need to be sensitive about how they present their results. Livestock are technically illegal in the city, but they are important sources of food and income.

And they don’t want to make pariahs of people who are already marginalized.

“We are not necessarily investigating who is spreading the resistant or the virulent organisms,” he said. “But actually we are trying to solve a problem.”

Another question is the role that food plays in spreading those bacteria. Mwai’s city livestock are one small part of the vast network that delivers meat, milk and eggs throughout Nairobi.

The Urban Zoo project is mapping those routes. In this modernizing East African capital, that includes everything from shiny, modern supermarkets to grimy street-food stalls.

Street food and other informal vendors are especially important in communities like Viwandani, where many people don’t have time — or kitchens — to prepare their own meals.

“You can find [residents] depending entirely on the [informal] food vendors,” says Nicholas Ngomi with the African Population and Health Research Center. That makes street-food hawkers and cooks in tiny corner shops key to protecting the health of Viwandani’s residents, he adds.

But food poisoning is rampant here. As Urban Zoo researchers mapped Viwandani’s food networks, they talked with these informal cooks about foodborne disease. One request kept coming up, Ngomi said: “ ‘Teach us about how these diseases come about.’ ”

The project didn’t have much money to spare. But they set up a half-day training session for 25 neighborhood food handlers.

They covered the basics: how to wash hands, produce and cutting surfaces, plus basic microbiology and food spoilage.

James Kuria, owner of the 11th Hour Butchery, learned that the meat that hangs in bright red slabs in his shop window goes bad quickly without refrigeration.

“If it will last here for long, it will maybe bring some diseases to my customers,” he said. Now he only buys enough to last a couple of days. That also means he throws away less, he added, which cuts his losses.

For Charity Nyambura, who sells rice, beans and vegetables at a nearby street stall, the big discovery was that her cutting boards can harbor bacteria.

“When you cut the kale there are particles that come off the board, and you unknowingly give them to the customers along with the kale,” she said. “So, they eat the particles in the food and in the long run it affects their health.”

Now she washes her cutting boards, knives and vegetables before she starts chopping.

Only a few hawkers got training. But success breeds imitation, Nyambura said.

“In this business there’s a lot of competition,” she said. “They’re always trying to copy what I’m doing so they can also try and get customers.”

The hope is that other vendors will copy Nyambura, Kuria and the other trainees, so food safety practices will spread through the neighborhood, slowing the spread of illness.

They are already making worrying discoveries.

“We have started seeing resistance among organisms that are easily recovered from animals or animal food products,” Kiiru said. “This evidence is going to give us a chance to … confidently tell the government, ‘We think there’s a challenge. Let’s improve the sanitation, the hygiene.’ ”