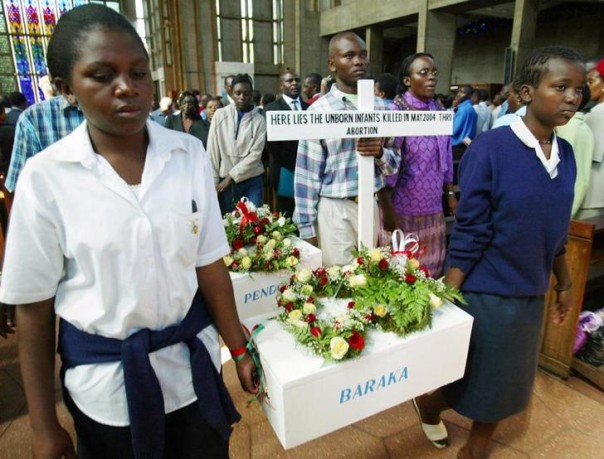 Kenya Unsafe Abortions Major Cause of Death and Injury

This June 3, 2004 file photo shows Kenyan schoolgirls carrying coffins of the 15 foetuses dumped in a river in Nairobi. Kenyan police arrested a gynaecologist suspected of carrying out the abortions after street boys discovered the remains of the foetuses stashed in four black plastic bags. REUTERS/Antony Njuguna

NEW YORK (Thomson Reuters Foundation)- Kenya has one of the highest national abortion rates in the world and most abortions are unsafe, constituting a leading cause of preventable injury and death among women, a report by the Kenyan health ministry said.

There were nearly 465,000 induced abortions in Kenya last year, virtually all of them “clandestine” and unsafe procedures, the report said.

In addition, nearly 120,000 women in Kenya received care for complications resulting from from unsafe abortions in 2012.

“More than three-quarters of women who sought post-abortion care were treated for moderate or severe complications, including high fever, sepsis, shock, or organ failure,” the report said. The severity of the complications often was exacerbated by delays in seeking care, the report found.

The most dangerous cases involved women aged 19 or younger, 45 percent of whom exhibited severe complications when they came to a health facility for post-abortion care.

Kenya’s abortion laws were slightly loosened in 2010 under a new constitution. Previously, abortion was illegal unless three doctors, including a psychiatrist, certified that it was necessary to save the life of the mother, a requirement often difficult to meet, especially in rural areas where medical professionals are in short supply.