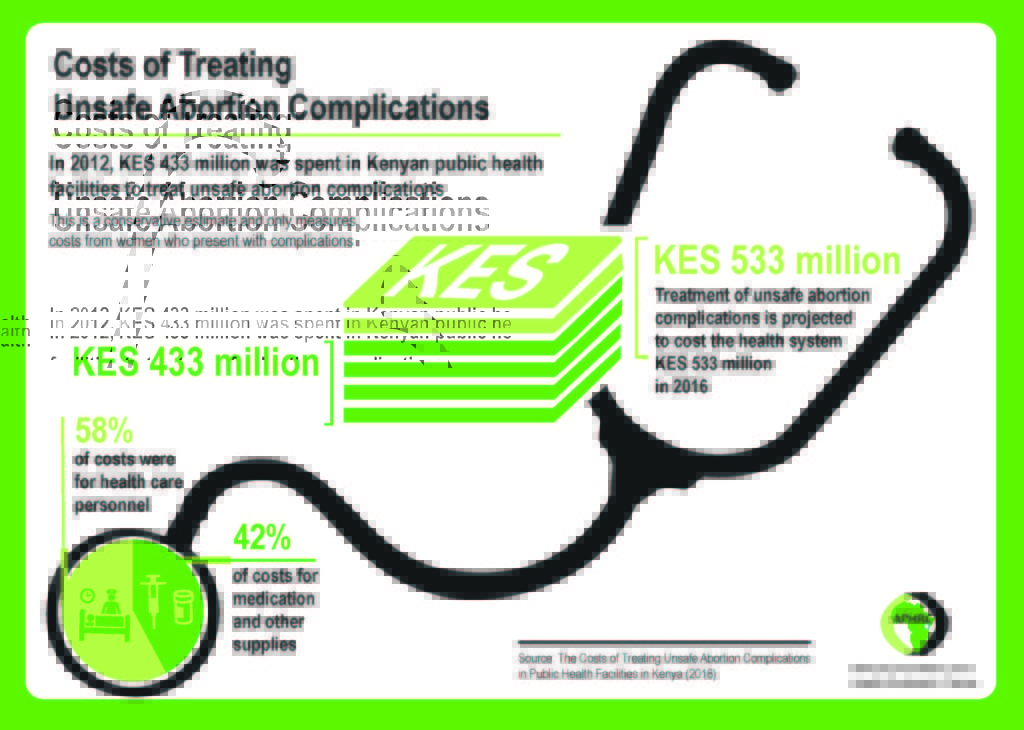 Kenya spent Sh533 million treating complications of unsafe abortions in public health facilities, according to a new report by the Ministry of Health and the African Population and Health Research Center.

The money – which is enough to procure at least two cancer machines – was used for medication, medical procedures to treat severe bleeding, organ failure, genital trauma and sepsis, a life-threatening complication from an infection.

The report titled The Costs of Treating Unsafe Abortion Complications in Public Health Facilities in Kenya shows that three out of four unsafe abortion-related admissions in Kenya are managed in post-abortion care wards in public health facilities. The cost of treating complications arising from unsafe abortions is putting a huge strain on Kenya’s health system in monetary terms and in terms of time spent by health professionals.

In 2012, when nearly 500,000 unsafe abortions were procured, with at least 100,000 needing treatment for complications and a quarter succumbing to the complications, Sh 432.7 million was spent to deal with them, which was double the estimated cost of increasing contraceptive access to 100,000 women of reproductive age.

Nearly four million unintended pregnancies could be prevented if women who need contraceptives get access, according to a report by the Population Reference Bureau titled Family Planning Saves Lives.

Abortion is only legal for emergency treatment or when the life or health of the mother is in danger in the opinion of a trained health professional. However, hundreds of thousands of girls and women still procure unsafe abortions in Kenya every year.

The average cost of treating a patient following an unsafe abortion in 2012 stood at Sh5,800, while the average annual per capita health expenditure was Sh3,500 to Sh4,500. This is excluding costs of extended hospital stays, intensive care and being attended to by highly-skilled health providers. This then exerts pressure on scarce health system resources with major implications for budgeting and resource allocation.

The report based on data from 128 public health facilities, shows that it costs more to treat patients in Nairobi at Sh7,674 per person, than anywhere else in the country. These differences may be due to the cadres of professionals and choice of drug combinations in the management of unsafe abortions at facility level.

The report noted that the lack of access to safe abortion services due to Kenya’s restrictive abortion laws and attendant stigmatisation is a leading driver of unsafe abortions. Others are failure to use modern contraceptive methods, contraceptive failure, and lack of comprehensive sexuality education (CSE) for young people.

Studies show that it is far less expensive to prevent unwanted pregnancies than it is to treat the complications that arise from unsafe abortions, and experts recommend addressing the drivers of unsafe abortion by enhancing access to contraceptives, timely and comprehensive sexuality education and a genuine discussion on how to prevent unwanted pregnancies.

This article was first published in the Daily Nation