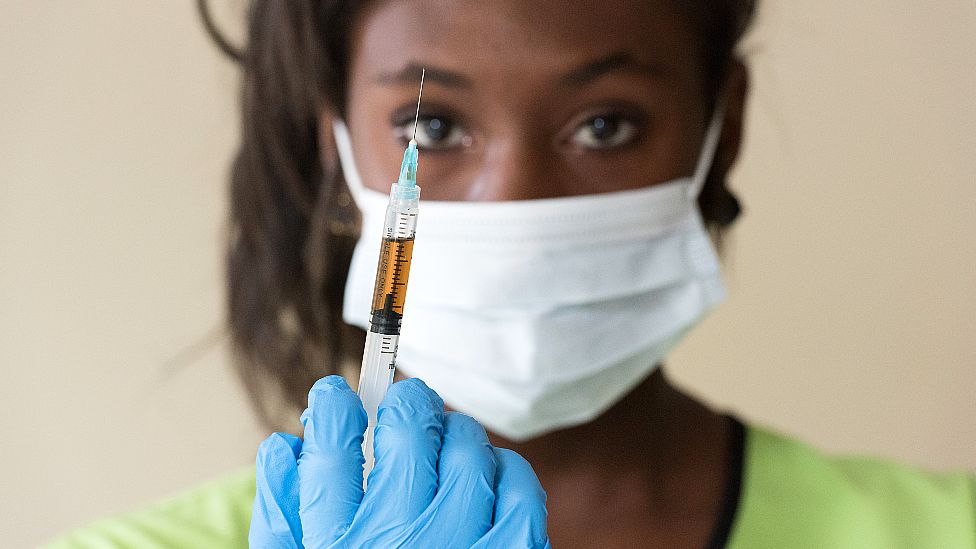 Coronavirus: Why Africans should take part in vaccine trials

There have been numerous scare stories about trials for a coronavirus vaccine being carried out on people in Africa.

However, scientists say that it is vital that Africans take part in these trials, arguing it could jeopardise efforts to find a vaccine that works worldwide – and not just for richer nations.

In March, Tedros Adhanom Ghebreyesus, head of the World Health Organization (WHO), announced a global “solidarity trial” looking at finding promising treatments for Covid-19, the respiratory illness caused by coronavirus.

As there are no known cures yet, an effective vaccine would play a critical role in preventing and controlling the pandemic, the WHO says. So far one vaccine trial has begun in South Africa – and one is one waiting approval in Kenya.

Yet the issue has been plagued by controversy.

And while vocal opposition to vaccinations of any kind is not new, the current debate in Africa centres on a race row.

It was sparked by two French doctors discussing a trial in Europe and Australia looking into whether a tuberculosis vaccine would prove effective against coronavirus.

During the TV debate, they both agreed it should be tested in Africa too, one saying: “If I can be provocative, shouldn’t we be doing this study in Africa, where there are no masks, no treatments, no resuscitation?

The tone of the comments caused a backlash.

“It was a disgrace, appalling, to hear during the 21st Century, to hear from scientists that kind of remark,” said Dr Tedros, who is Ethiopian.

“We condemn this in the strongest terms possible, and we assure you that this will not happen. The hangover from a colonial mentality has to stop.”

Unsurprisingly prominent African personalities added their voice to the outrage, including former footballers Didier Drogba and Samuel Eto’o – both of whom have been victims of racial abuse on and off the pitch during their careers in Europe.

Such anger is well founded as it has been documented that racism and economic discrimination exist in healthcare.

There is evidence that pharmaceutical companies have carried out trials in parts of Africa, with little regard to ethics or even simple respect for human life.

An infamous drug trial was carried out by Pfizer in Nigeria’s northern state of Kano in 1996.

A long legal battle ensued leading to the pharmaceutical giant paying compensation to some parents whose children took part in the trial during a meningitis outbreak.

Eleven children died and dozens were left disabled after being given an experimental antibiotic.

It raised serious questions around consent and whether any had been obtained from the parents.

More than two decades on, scientists like Ugandan researcher Catherine Kyobutungi say things have changed and the process is more rigorous and transparent.

“There are safeguards at the individual level,” Dr Kyobutungi, head of the African Population and Research Center (APHRC), told the BBC.

“If you are a scientist involved in vaccine development, you don’t want your vaccine to be the one that a few years down the line, [is] killing people.

She says there are now also safeguards at institutional and national levels – countries have regulatory bodies such as Uganda’s National Council of Science and Technology (UNCST).

“You can’t do vaccine trials without approvals to see that all the right safety procedures are being followed.”

Richard Mihigo, who oversees immunisation and vaccine development for the WHO in Africa, agrees.

“Within the system there are safeguards and also incentives that make it unlikely that Africans will be exposed to unhealthy products.”

Those who conduct the research are not allowed to be involved in the marketing and production of any subsequent drug or vaccine, he explains.

Such assurances are often deafened by a slew of fake news on social media with theories about a plot to carry out harmful vaccinations on black people with the aim of killing them.

For instance, a fake story about the death of seven children in Senegal after they were given a supposed Covid-19 vaccine caused uproar on Facebook.

It began circulating in early April around the same time as the French doctors’ controversial comments – which gave the fake story even more potency.

The WHO has termed the circulation of fake information an “infodemic”, deserving serious attention.

But what has not had serious attention over the years is healthcare systems in Africa.

This is despite a pledge in 2001 by African heads of state to give at least 15% of their annual budget to improving their health sectors.

So far the target has only been reached in five of the continent’s 54 countries – which has repercussions for scientific research.

Africa has a wealth of expertise, but their scientists often go to work elsewhere because of this lack of investment – meaning that research into the African dynamics of health issues are often not addressed.

Those that stay find it difficult to organise partnerships, as sponsors opt for countries with a reliable healthcare infrastructure, meaning most trials are done in Egypt and South Africa.

Also many licensed drugs come out of clinical trials done in wealthier countries, in North America and Europe, meaning their suitability for use in Africa goes unchecked.

Eastern Europe, Asia and the Middle East are also rarely involved in trials – although numbers have increased marginally over the last two decades.

Africa risks getting ‘locked out’

Experts agree that to get a handle on this pandemic, any Covid-19 vaccine must work globally.

They say if the continent distances itself from trials, it will continue its legacy of exclusion.

“It is not OK that the vaccine is tested in the UK for instance and then brought to Africa because we have different circumstances, different genetic make-up that may affect how the vaccine works,” says Dr Kyobutungi.

“We may have different strains; we have other disease profiles as well. For instance, we have a big population of people with HIV.”

But her biggest worry is that Africa will be excluded no matter what happens, because the continent already has problems when it comes to doing coronavirus tests as “countries have retreated inwards, they are hoarding their supplies”.

“So the largest danger that Africa faces is that the vaccine is out there and the rich countries buy all of it and there is none left for the Africans,” she says.

With trials ongoing worldwide, world leaders and experts have written an open letter calling for a “people’s vaccine”.

Cyril Ramaphosa, South Africa’s president and current chair of the African Union, is quoted in the letter as saying the continent wanted a vaccine that was “patent-free, rapidly made and distributed, and free for all”.

“Nobody should be pushed to the back of the vaccine queue because of where they live or what they earn,” he said.