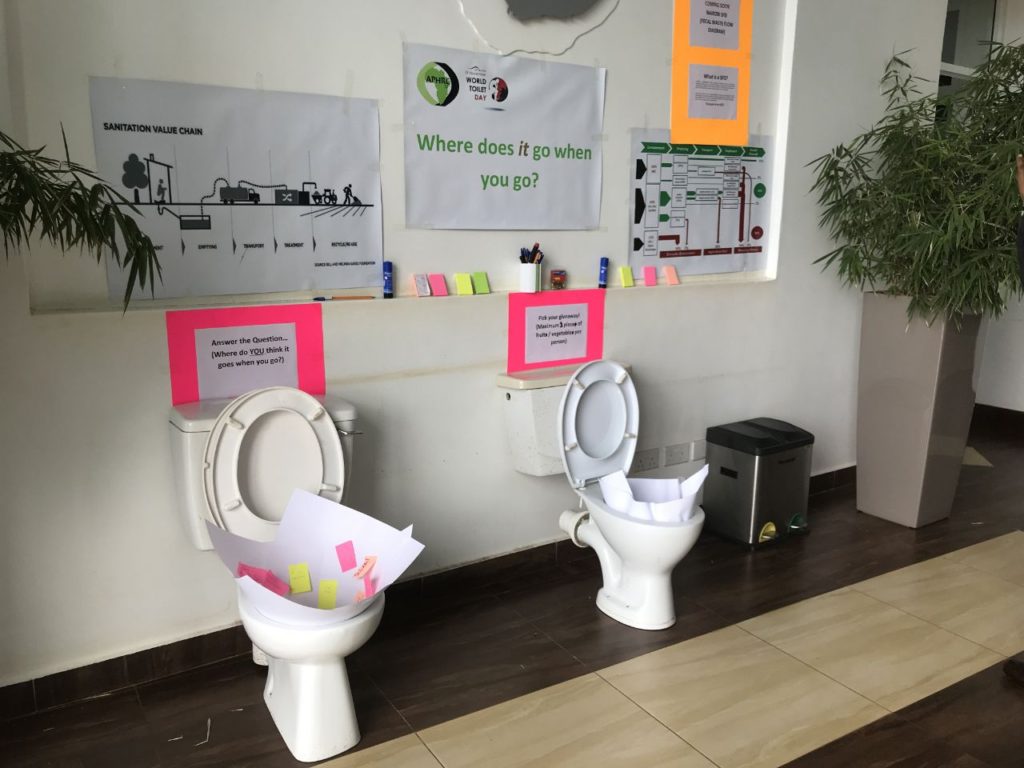 Sound, Smell, Touch, Sight, Taste: Why Conquering the Senses is the Route to Achieving Safe Sanitation

Small words – in any language – with unmatched potential to enable us engage all our senses. And not in the most positive way. Did you flinch? Conjure a color? Texture? A runny sound or a definite thud? Probably smelly, right? And, definitely NOT something you’d like to get close to your lips. Or let escape from your lips- for they are likely to offend another who may, again, in a split second, go through the motions you just went through!

Yet the reality is that unsanitary words are rife -and necessary- when talking sanitation. And the road to achieving safe sanitation demands that we have frequent conversations with the candidness that poop deserves.

Where does it go when you go?

The concept was simple. The props, very basic, their everyday use- unmistakable.

Two toilet bowls, one to ‘flush’ down a response, the other to pick a giveaway. In the background, visualization of how poop flows. These were placed strategically at APHRC campus lobby, and at the Jomo Kenyatta University of Agriculture and Technology (JKUAT) main campus.

The installation at the APHRC campus

The installation at the Jomo Kenyatta University of Agriculture and Technology (JKUAT), Juja Main Campus

Crowds gathered. Curious, excited, and yet some with playful disgust. It was common to hear the same questions with each fresh round of participants stopping by the installations. ‘Are the toilet bowls clean?’, ‘Why have you set up these just before, and on our way to lunch?’, ‘Were these fruits cultivated using human waste? Don’t they have pathogens? How do they taste?’, or the most interesting reference to a study done that revealed low uptake of  modern Water Closets (WCs), as some residents in the urban slum of Kibera, Nairobi, Kenya, indicated a satisfaction in hearing the resounding ‘dup!’ of their poop hitting the bottom of the pit latrine.

It was clear that the subconscious was bringing up sounds, smells, touch, sight and taste associated with poop, real or imagined- and playing into the shy, embarrassed and taboo way in which people treat related conversations.

Better Out than In

This adage that rings true about expelling bottom wind should also be applied in earnest in dialogue to identify gaps, and seeking solutions to achieving safe sanitation. For far too long, the flipside has meant perpetuating a stubborn culture of silence, which feeds into the health crisis arising from unsafe management of fecal sludge and wastewater.

Notably, contamination of food and water continues to contribute to diarrhoeal disease of epidemic proportion in urban areas, contributing to mortality in children under 5 years. The majority of ‘Where does it go when you go?’ interactions underscored how poop talk is sanitized or euphemized to an extent that hampers any meaningful follow-on conversations.

A graphic response from a Facebook user reveals a rare awareness which can be harnessed towards agency of holding stakeholders accountable. He identifies multiple issues including his expectation of service delivery as a taxpayer, the unsightly image of waste on the roadside, and contracting Cholera from contaminated water…probably from his own feces (‘’then I learn my bullets finally ends (in) me…weeks down the line’’).

The African Population and Health Research Center (APHRC) is implementing an urban sanitation project in East Africa with the aim of improving and expanding implementation and resourcing of national sanitation policies. The project aims to contribute to an enabling environment for increased access to safe sanitation through taking an evidence-based approach to understanding how to bridge the gap between theory and practice in sanitation service delivery.

Ahead of commemorating World Toilet Day on November 19, the week-long ‘Where does it go when you go?’ campaign aimed to gauge, if any, awareness and understanding of the sanitation value chain: from toilet to treatment.

It also sought to challenge perceptions by bringing conversations about poop out into the open, and to advocate for reuse/recycling of fecal matter in innovative ways that speak to safe sanitation, creation of livelihoods in fecal waste management, improving child nutrition and overall health outcomes through use of treated waste to boost farm produce.

The campaign was run prior to the release of a Fecal Waste Management Flow Diagram (SFD) for Nairobi County, an exciting, intense collaborative effort with government, civil society and private sector partners.

For more information on the project visit: https://aphrc.org/post/projects/fecal-sludge- management