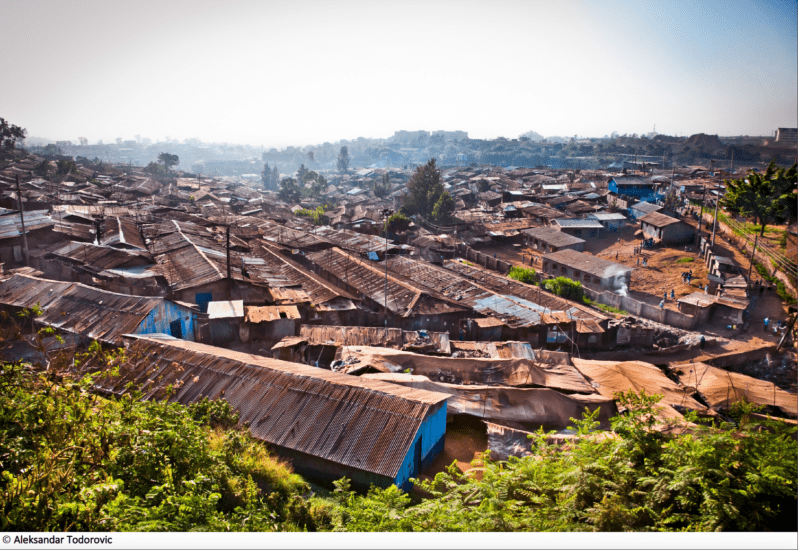 Obesity, a risk factor for multiple non-communicable diseases, is rapidly increasing in prevalence in many low- and middle-income countries, including those in sub-Saharan Africa (1). Findings from recent research suggest that this increase is a result of complex interactions between rapid changes in lifestyle factors including increased consumption of high-calorie diets, low levels of physical activity and high levels of sedentary behaviour, along with other genetic and environmental factors (2).

UN-HABITAT reported that slum communities currently constitute about 56% of the urban population in sub-Saharan Africa (3), equating to over 200 million people. Traditionally, undernutrition is understood to be the major public health problem in slums. However, although this remains an important challenge, overweight and obesity are also being increasingly observed in these settings, with communities now often experiencing the double burden of both under- and over-nutrition (4).

It is important to identify what factors are leading to unhealthy increases in BMI in slum settings, to better understand how to address these, and prevent associated diseases. A key potential risk factor is socioeconomic status (SES). The direction of association between SES and obesity has been shown to be different across low-, middle- and high-income settings (5). A better characterisation of the relation between SES and BMI in urban slums would therefore be essential to gain setting-specific insights regarding interventions addressing overweight and obesity.

In our recent study, we examined the association between wealth index (as a measure of SES, calculated by combining information on living conditions and household assets) and BMI in Nairobi slums. Importantly, one fifth of our study population was obese, with greater obesity prevalence among women than men (32.2% versus 5.6%). We found strong positive associations between BMI and SES, with wealthier individuals more likely to be overweight or obese. The magnitude of this association was higher for women – as wealth increased, the corresponding increase in BMI was greater among women compared with men.

Increased SES could be linked to increased BMI through pathways related to diet and physical activity. Research has also implicated perceptions relating to body size in mediating such associations. In many slum communities, there is a perception that large body size is a sign of beauty or wealth,  increasing preference for overweight or obesity among a notable proportion of community members (6). On the other hand, underweight is seen as a sign of chronic disease. For example, in a recent study, only approximately 10% and 30% of women associated being thin or normal weight respectively with being healthy, with many associating thinness in particular with having HIV/AIDS (7). Such perceptions may contribute to increased prevalence of overweight and obesity and reduce the effectiveness of strategies focusing on diet and physical activity to reduce BMI.

While socioeconomic development in urban slums is ideal, our results suggest that further work is required to ensure this is appropriately translated to favourable health outcomes for residents (8). This suggests the need for, for example, integrating health promotion interventions and economic strengthening initiatives in such settings, with a potentially greater focus on women. Given the unique nature of slum communities, interventions will likely need to be tailored to their specific needs and characteristics. In this context, our study provides a first step for undertaking further research to inform more suitable interventions to achieve both wealthier and healthier slum communities.

*This article was initially published in the Global Health, Epidemiology and Genomics journal*

Share
Copyright © 2022.   African Population & Health Research Center.  All Rights Reserved.
APHRC is a 501(c)(3) Registered Non-profit.
EIN: 06-1608361
Guidelines On Data Access &
Sharing
We use cookies on our website to give you the best experience by remembering your preferences and repeat visits. By clicking “Accept”, you consent to the use of ALL the cookies.
Cookie settingsPrivacy policyACCEPT
Review Cookie consent