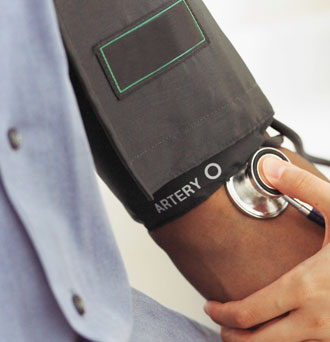 Non-communicable diseases like Hypertension have always been regarded as problems of the rich world- but this has changed drastically in the last two decades with average blood pressures now higher in Africa (even among the poorest) than in Europe and the U.S.

So what exactly is Hypertension? Commonly known as high blood pressure, Hypertension is the number one risk factor for cardiovascular disease (CVD) in Africa. Consequently, CVD has taken over as the number one cause of death in Africa. The total mortality numbers will most likely only continue to rise over the next few decades as a result of growing urbanization and the related lifestyle changes associated with living in urban areas.

Traditionally in Africa, communicable diseases, maternal, perinatal and nutritional illnesses accounted for the greatest numbers of premature deaths, but this burden is quickly shifting towards chronic non- communicable diseases (NCDs), including CVDs. This phenomenon is what is being termed as the “double burden of disease”. Whereas high blood pressure was almost non-existent in African societies in the first half of the twentieth century, estimates now show that in some settings in Africa more than 40 percent of adults have hypertension.

The new epidemic of hypertension and CVD is not only an important public health problem; it will also have big economic impacts if a significant proportion of the working-age population becomes chronically ill or dies, leaving their families in poverty.

At this stage of the hypertension and CVD epidemic the most important thing we can do is to raise awareness about the importance and urgency of knowing your blood pressure. This is particularly important because like many other NCDs, Hypertension is a silent killer that generally has no specific physical complaints, so it can only be detected by having your blood pressure measured on a regular basis.

There are also things that government health care systems can do to help with the prevention of CVD 1) by developing standardized guidelines for managing hypertensive patients in primary health care settings and 2) by sharing best practices for affordable and effective community based programs in screening and treatment of hypertension.

In order to prevent and control high blood pressure in the population, African governments also need to develop and implement policies using a multi-sectoral approach including involving the Ministries of Health and other sectors such as education, agriculture, transportation, and finance among others.

This combination of awareness raising and better policy development and implementation coupled with more research on prevalence of hypertension and risk factors in different settings in the region can make a difference in the prevention of CVD in Africa.

In the meantime, this February you can do something for yourself to prevent real heartbreak: get your blood pressure checked today.