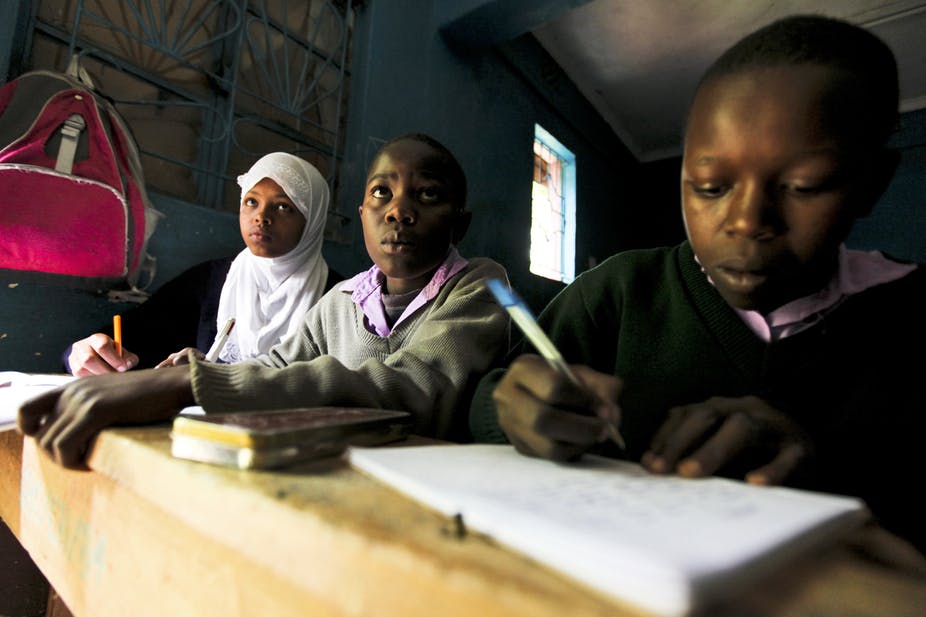 Students in a Nairobi slum school. There are more than monetary barriers for parents from poor neighbourhoods. EPA/Dai Kurokawa

Ten years ago Kenya abolished tuition fees for children attending its secondary day schools. The aim was to get more children to transition into secondary school, particularly those from low income households.

Day schools, unlike boarding schools, don’t provide accommodation for learners. Instead, learners come to school in the morning and leave for home at the end of the day. The government backed measure has achieved some success as enrolment numbers have improved since 2008.

The latest available statistics from 2016 show that the net enrolment rates in secondary school was 51.3%, up from 28.9% in 2008. Net enrolment is the official age-group of school going children for a given level of education expressed as a percentage of the corresponding population.

But there have been ongoing concerns that the programme hasn’t achieved its objectives and earlier this year the government adjusted it again. The subsidy per student per year now stands at more than twice the original level introduced in 2008.

The problem with the original programme was that it didn’t cover the numerous additional fees demanded of students. These include caution money – to cover damage to school property — and contributions to fund new school facilities. In addition, the cost of lunch and uniforms continued to be a barrier for students enrolling in secondary school.

Even with the recent subsidy increase, these levies will continue to be charged. This means that they’ll remain a barrier to secondary school transition and retention rates for Kenyan children.

According to education researcher Asayo Ohba, levies to join day secondary schools cost about eight times the average monthly income of an employed parent, 12–17 times of a self-employed parent, and 19–20 times of a peasant parent engaged in casual work.

But there are more than monetary barriers for parents from poor neighbourhoods. Our findings from two projects run by the African Population and Health Research Center (APHRC) in partnership with community organisations in Nairobi’s informal settlements show that support from families, mentorship and after school interventions can make a dramatic difference. As a result of these kinds of interventions we found that the retention rates among girls went up by a fifth over a three year period.

While the government’s initiative is well-intentioned, many children are still unable to attend secondary school because they’re locked out by other non-school fee items.

Enrolment is also differentiated by region. The Coast region, for example, has one of the lowest enrolments in the country. This region located in south-east Kenya, extends inland from the Indian Ocean coastline and has the tourist resort towns of Mombasa, Malindi and Lamu.

To address the low enrolment rates, the government launched the “Peleka Mtoto Shule” initiative earlier this year, and called on parents and community members to ensure that children who had completed primary school were enrolled in secondary school.

But it doesn’t seem to have worked. By the time the deadline for admission closed in mid-January, only 27% of Form One students had reported to school in the region. Form One is the first year of secondary school.

A number of reasons were put forward for the low turnout. These include:

The two interventions initiated by APHRC sought to improve and advance learning outcomes and transition to secondary school through community participation. The intervention activities consisted of: after-school support with homework in literacy and numeracy; life skills mentorship; leadership skills training; parental guidance and counselling; as well as support to students achieving certain scores in the Kenya Certificate for Primary Education exam.

The programme involved parents at every stage of the implementation process. The initial phase which ran from 2013 to 2015 consisted of girls only.

After about three years the transition rates among girls improved by up to 20 percentage points.

The experience has provided useful insights. One is that it may not be enough to direct more money towards solving education issues. Subsidies must be accompanied by interventions that actually address barriers faced by poor people, such as those that hinder transition to secondary school among the poor.

And it’s not enough simply to issue policy directives with the assumption that implementation can be controlled by a central authority. The project suggests that getting more children into secondary school requires striking a balance between top-down policy pronouncements and bottom-up implementation approaches. A bottom up approach would require intensive involvement of teachers, pupils, principals, parents, and board members.

Mwangi Chege contributed to this work.