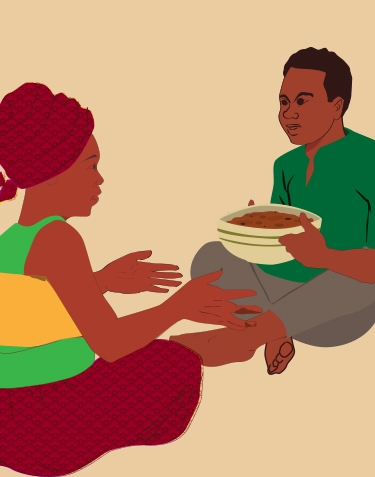 “Who of You Went to Bed Hungry Last Night?“

“In hunger eradication, the problem that we need to tackle is not food production but economics and food wastage.” This was the key message by Dr Richard L.K. Glover, Programme Specialist in Biological Sciences at the International Council for Science Regional Office for Africa (ICSU-RAO) in his opening remarks at the Food Security in an Urbanizing World workshop held in Addis Ababa, 20-22 March 2013.

The workshop focused on food security for the urban poor, and particularly in the context of climate change which was an exciting development for the food security discussion.

I was particularly excited to listen to contributions from various people from major development partners and food security networks including FAO, AFSUN and Food for Cities at the conference, and felt there was some new discussions around food security and climate change since we were all looking at it from the urban angle.

According to Food and Agriculture Organization (FAO), “food security exists when all people at all times have physical, social and economic access to sufficient, safe and nutritious food to meet their dietary needs and food preferences for an active, healthy life.” Therefore, food security is about availability, stability of supply, access and utilization by the body and it was looking at food security from this definition that most of the discussions were focused around.

Dr. Glover also indicated that farmers all over the world produce food that can feed up to 12 billion people, almost double an amount needed by the world’s seven billion people. However, some people do not have access to this food because either they do not have money to purchase it, or the food never reaches them due to poor distribution, often as a result of poor infrastructure. Additionally, he mentioned that a great dealof this food is wasted due to lack of proper storage facilities.

During the discussions Dr Jonathan Crush, Director of the CIDA-funded African Food Security Urban Network (AFSUN) asked the intriguing question “who of you went to bed hungry last night because they did not have food to eat?” He made many people in the room start to think about what food security really means. While sleeping hungry because of lack of food may be unimaginable for many people, it is the reality for many slum dwellers in the developing world.

Research by African Population and Health Research Center (APHRC) conducted among slum dwellers in Nairobi, Kenya, which I presented at the workshop and which provoked great interest shows that less than one-in-five people are food secure, while close to one-in-five people either eat one meal a day or eat nothing. Residents of urban slums in Kenya and other developing countries have to contend with high levels of unemployment and underemployment. Their limited earnings mean no access to adequate quality food. Additionally, the cash-based system where payment is often in daily wages means that slum dwellers can only buy food in small quantities. They, therefore, pay more for food due to diseconomies of scale, relative to their non-slum counterparts who have formal employment and earn a monthly income. Further, they are unable to keep stock of food, hence are highly vulnerable to food insecurity during emergency situations when food production or distribution thereof is interrupted. Given limited agricultural land in urban areas, slum dwellers are unable produce enough of their own food and, therefore, rely mainly on food from rural areas sold at local markets. Good infrastructure is, therefore, critical to their access to readily available fresh and quality food. However, many slum settings are marred by very poor infrastructure (poor roads, limited electricity, and poor water and sanitation services).

The situation is made worse by the threat of global climate change which has been a cause of unstable climates, periodic floods and droughts, drastically affecting food security among the world’s most poor people who rely on food produced through rain-fed agriculture, and whose limited livelihoods and poor infrastructure limit access, particularly during periods of unstable supply. There is dire need for climate change mitigation and adaptation efforts to protect the world’s most poor people from its current and anticipated consequences.

According to the UNEP Adverse climate change in low and middle- income countries need to be addressed through access to advanced climate technologies in order to adapt to the impacts of climate change and to move onto low emission development pathways.

There is a need to identify which technology that can best be adapted to the local circumstances, as well as to remove barriers preventing the widespread diffusion of climate technologies in national markets. In Kenya many farmers have adopted the green house farming technologies which have been successful over time in the fish industry and horticultural agriculture. Such technologies will save a nation from hunger to food security when experiencing climate challenges.

Attaining greater food security will only be possible when we address the needs of the urban poor and simultaneously look to larger systematic issues like food distribution and urban planning. Finally if we are to decrease the number of food insecure people across the developing world we will have to use the right technologies for local contexts to combat the increasing impacts of climate change and the impact it has and will continue to have on food security in the Global South.

This workshop was an eye-opener on the inter-linkages between urbanization, climate change and food security. Future workshops and conferences should discuss further on mitigation and adaptation strategies for the urban poor.