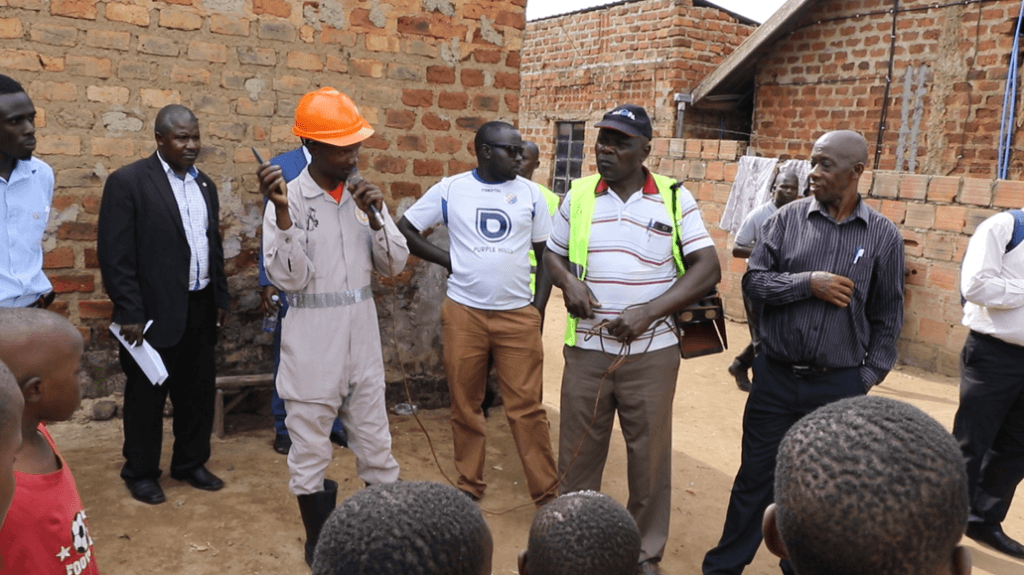 A walk through Lukuli informal settlement in Makindye division, about 12 kilometers south of Uganda’s capital, Kampala, is a journey through a damp maze of ever-narrowing passages, meandering to sections where the shanties press together so tightly, that daylight barely reaches the footpaths below.

From a distance, it is a visual eyesore, a symbol of raw inequality epitomizing the failure of policy makers to accommodate about 400,000 of the slum-dwellers in this area, searching for opportunities in decent urban settlements within the city. On the contrary, it underscores the determination of some residents here who have made this place an ecosystem buzzing with economic activities.

Inside a twin-pit latrine tucked in a corner adjacent to pre-fabricated shanties with rickety corrugated roofs, two men dressed in safety suits extract fecal waste from the latrines into plastic buckets, using a T-shaped tool resembling a giant bicycle tire inflator pump. The waste is then emptied into a movable tank and then transported to a recognized treatment plant.

John Businge, the employer of the two men is among those who have lived and schooled in this area for years, their one-room tenements and low-rise homes dwarfed by the sparkling glass and chrome office buildings and lavish hotels that dot the city. The irony is that Businge is now a multi-millionaire thanks to the waste emptying services – known as the Gulper Technology – he provides to the area.

Holding a microphone under sweltering heat, he explains to a delegation of Mbarara municipality officials – who have travelled about 270 kilometers to Lukuli – the details of this innovative and affordable technology, the challenges and the opportunities of the business.

“Some people ask me why I have set up an office here yet I have a lot of money to get myself a better place but I usually tell them that I want to be closer to my clients. I have been doing this business for the last six years and although many people perceive it to be a job for the poor, it has helped me to turn my life around as it comes with a big paycheck” said the 33-year-old Businge.

Desperate to escape poverty, the father of two, who holds an undergraduate degree in business management, narrates how he went through a litany of woes when he started the business. The stigma attached to the job led to desertion by his wife, his friends, and he even became a laughing stock among his own family members.

“I come from a family of 11 and we grew up very poor. After my university graduation I had been job-hunting for years, although my efforts proved unsuccessful. We used to go hungry. When I saw this business opportunity I jumped at it because no one was ready to engage in it. Unfortunately, a few months into the job, my wife divorced me with a six month old baby claiming that I was embarrassing her among her friends and family. My own family rejected me and told me I should not be associated with them, but I picked myself up and vowed to soldier on”, he recalled.

About 90 per cent of Kampala’s population relies on on-site sanitation facilities (pit latrines and septic tanks) while 50 per cent of households share one sanitation facility, leading to unhygienic conditions that Businge thrives on to expand his business. He mainly serves areas that are not accessible to vacuum trucks and charges roughly US$50 per pit latrine but sometimes the amount rises to US$80 depending on the amount of fecal sludge extracted.

Having expanded his business beyond Kampala and across the borders to countries such as Rwanda, Malawi and the Democratic Republic of Congo, Businge claims that he currently makes a whopping US$72,000 per year, an exponential growth that has forced him to employ 13 people and buy three cesspool trucks for transporting fecal sludge to treatment plants. His social standing has also risen as he has regained his friends, family and attracted a new wife whom he says has embraced his job.

“When I was starting I approached banks and cooperative societies for loans to purchase a truck to help in my business but they never listened to me. They did not have time for me as they repeatedly told me it was not a viable business. I was turned away regularly as I did not have any collateral like title deeds or log books or any property.”

“All the money I have made is directly from my savings from my first year of business. It is what I have used to build my family home, pay school fees for my kids and buy trucks. I have even opened a hotel business for my mum who at first looked down upon this business. Now that the banks sales staff have discovered I am doing well, they are the ones approaching me to propose loan schemes”, he said with a chuckle.

Unwilling to rest on his laurels, Businge is keen to continue learning and exchanging ideas with other professionals and partners in the same sector and is looking forward to attending the Kenya Sanitation Conference to be held in Nairobi in the last week of October 2019.

“As we speak, I have signed a contract with Makerere University, a couple of NGO’s and the World Bank on data collection of poop samples for laboratory analysis. I have won many top awards as a result of this job, so I cannot stop learning from other stakeholders. I want to be the best in this ‘shit’ business”, he said.