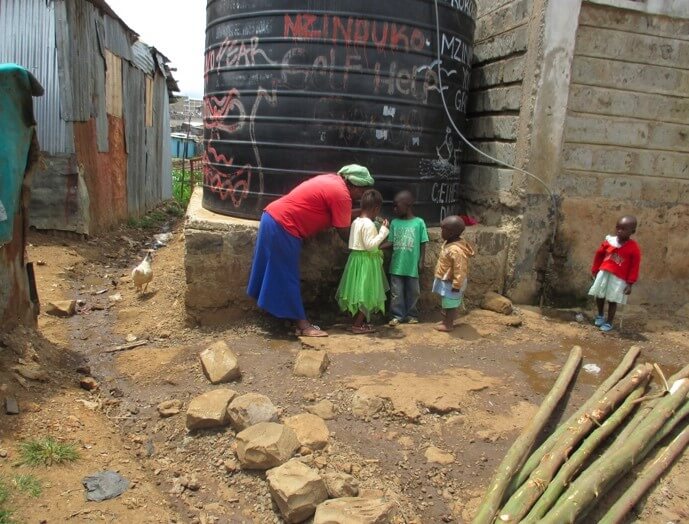 Through the Eyes of Mothers: A Look Into Challenges Faced by Women in Korogocho Slum

What happens when you ask mothers from an informal urban settlement to take photos to answer ‘how does child care affect your work’ and ‘what are some of the challenges and some of the solutions?’ Thirty-five photographs that seamlessly portray the day-to-day challenges of combining work and child care.

PhotoVoice is a participatory research tool that gives a voice to research participants to document and share their experiences. The ‘Creating Better Economic Opportunities for Women in Nairobi Slums through Improved Childcare Options’ project used this research method to better understand the challenges women in Korogocho slum face when combining work and child care.

“There is sand that has been poured, and this child is playing with the sand for cementing the house. That dust is harmful. If the mother had money, she would take them to daycare.” 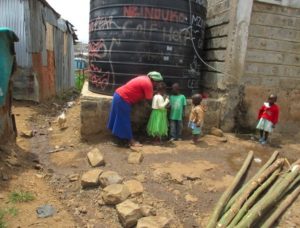 “That mother, she is with her children there, but if you look carefully, the neighbor’s child is close to the electric line. So, it would be good for this mother to also take care of her neighbor.”

The African Population and Health Research Center (APHRC) and McGill University created an exhibit for stakeholders and policy makers to engage with the women and their photographs at APHRC Campus on June 22, 2016. Visitors were eager to learn more about life in Korogocho from the point of view of those most intimately connected to the issues at hand, and mothers invited them to learn about about the stories behind the images. Guests at the event were enthralled by the photos and had a chance to interact with the photographers themselves, as they heard their stories firsthand on the issues captured in the photographs. The visitors quickly filled the room with voices discussing their individual reactions, root causes of the problems, and possible solutions.

The advantage PhotoVoice holds over other qualitative research methods is the direct involvement of mothers’ whose analysis is considered side-by-side with that of the researchers.

Arguably, the most important part of PhotoVoice is the process. While the photos serve as the initial means of captivation for the audience, the captions are what provide context. Through the use of captions, the women are able to decide which aspects of the picture they want to highlight and in turn, what they believe to be the most serious issues plaguing their community. The mutually reinforcing relationship between the visual and the verbal allows for onlookers to truly see through the eyes of the mothers.

When asked how she felt about her experience with PhotoVoice, Rachel, a mother from Korogocho, gave an eye-opening response that at the heart of it reveals why PhotoVoice is so imperative. “I am the one uplifting my own community. I am the one speaking and representing my community. I am empowering myself and my people without any fear of what will happen” she stated simply. “It allows people to understand that stories they may hear and ignore are not myths or rumors, they are our reality.” A reality that PhotoVoice, in the mobility and uniqueness it embodies, can help change.

Visitors had varied reactions to the exhibit. “These photos say that adults in Korogocho are so mired by their own problems, they cannot support others – including dependent and helpless children”, said Joyce Mumah, a guest at the exhibit and APHRC researcher. “People in Korogocho are not concerned not because they are bad people, rather, because they have been desensitized to these conditions as they have become a daily reality.”

Another guest named Marika agreed, saying, “Here is a three-year old manning a toilet. Is he able to differentiate between a 5 shilling and 20 shilling coin? When I was that age, I did not even know my mum had a name!”

The photos bring into perspective the catch-22 mothers find themselves in. No mother wants to put their child in that situation, one mother explained, though most have little choice as to whether to care for their young children or leave them unattended (or inappropriately attended) to search for work.

“This looks like a toilet and there is drainage where it is… this young one can fall into it, and so it can cause an accident. It also sees that the children there are the ones charging for the toilets, so it looks like it is child labor, which is not good and it is not healthy because of the smell from the toilet and the drainage.”

“We find that this child is crossing the road without anyone to help him/ her. It is like the mother was not able to leave this child anywhere for someone to look after her child, and it looks like this mother has gone to look for a casual job so the children can eat.”

In addition to being concerned with the conditions young children face, guests were also made aware of the lack of job opportunities available to women in Korogocho. Janet, one of the mothers, shared – while pointing to a photo of airline food amongst endless garbage – that women dig in the dump sites to salvage discarded food packages from local airlines to re-sell or to feed their families.

One visitor asked why local airlines do not donate the food. Janet explained that they are not allowed to give away food that has been thrown away for legal reasons. “Does the government know about this? They need to move this garbage site!” a guest remarked. Janet then gently reminded her, “At the end of the day, the dump site is a place of business. If they move it, they are taking away a source of income for many women.”

“‘Chombo’ is food from ‘boma’ (dumpsite), the one which comes from Kenya Airways. As you can see, these are the children, and the mother is the one who brings these things from the ‘boma’ for them to sell for her.”

The exhibit was displayed on June 24 to community members and leaders at the Korogocho  Community Hall. In the open space hung the cloth photos on long strands of twine; this unique set up allowed onlookers to get up close and personal with the digital depictions of their challenges.

Korogocho’s Chief made remarks at the exhibit. He noted the long hours women in his jurisdiction work. “Women in this community work 24 hours of the day while the men work around 7 hours,” he lightheartedly quipped as the audience unanimously agreed with him. He added that women make far less money and have exceedingly less control over household finances. The Chief acknowledged that this disparity needed immediate attention and action by government. He was thrilled by the opportunity PhotoVoice provided to highlight the issues and elicit discussion on a community and governmental level.