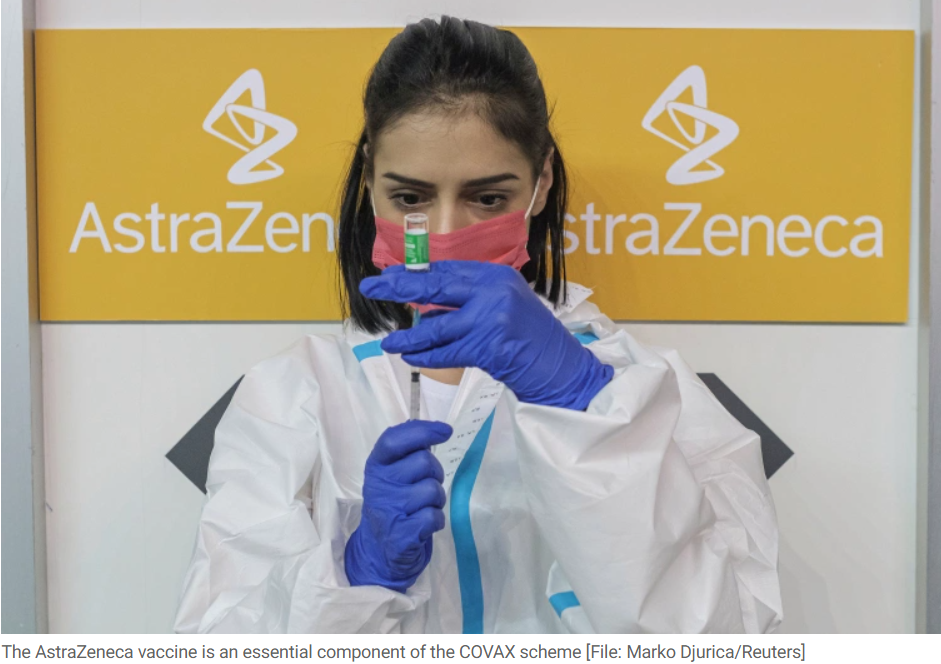 The AstraZeneca jab and the price of fragmented decision-making

Elena Hugony was sure about one thing as she entered a COVID-19 vaccination centre in the Italian city of Palermo last week: she was not going to allow to be injected with the AstraZeneca vaccine.

Sure enough, when a healthcare worker approached her with a shot of the jab developed by the Anglo-Swedish pharmaceutical giant and the University of Oxford, the 75-year-old stood firm to her conviction. With Hugony refusing to leave, a doctor finally relented after four hours and gave her a shot of the Moderna vaccine.

“No way I was going to get the AstraZeneca, with all the confusion around it,” said Hugony.

The confusion felt by Hugoni – and shared by many others globally – is seemingly the after-effect of a number of missteps that have dogged a vaccine long touted as one of the world’s best hopes to beating coronavirus. Messy clinical trial data and manufacturing issues have all damaged the AstraZeneca jab’s reputation, experts say, while recent reports linking it to very rare blood clots have further sapped public confidence.

All this, despite both the European Medicines Agency (EMA) and the World Health Organization (WHO) consistently stressing that the vaccine’s benefits far outweigh the risk of side-effects and advising against any restrictions to its use. Still, national health authorities have moved ahead with their own risk and benefit assessments, which, remarkably, have drawn dissimilar conclusions – ranging from limiting the vaccine’s use in different age groups to suspending its usage and even ditching it entirely.

Such fragmented decision-making, experts warn, may harm efforts to build public trust, as well as carry unintended implications for countries that lack access to other vaccination options besides the AstraZeneca vaccine, whose latest clinical trial in the United States showed a 76 percent efficacy at preventing symptomatic disease.

“It is not transparent to one why some countries made certain decisions, especially when regulators have not suggested that there should be restrictions based on age,” said Penny Ward, a visiting professor in pharmaceutical medicine at King’s College London.

“There has been a lot of heat, but little light given that the vaccine is clearly effective in preventing deaths and hospitalisation,” she added.

The possible link between blood clots and the AstraZeneca vaccine was first detected in Norway at the beginning of March, followed by cases found in Germany and the Netherlands. The findings prompted at least 16 European countries to suspend or limit their AstraZeneca vaccine rollout pending further investigation.

In the United Kingdom, the country’s health authority, as of April 5, had received 100 cases of blood clots, 22 of which were deadly. The country had administered more than 20.6 million first doses of the AstraZeneca vaccine at the time. Following a review, the UK regulator assessed that the risk of hospitalisation due to COVID-19 was higher than the threat of suffering serious harm from the vaccine for all age groups but for those under 30, for whom it recommended the use of an alternative jab.

For its part, the EMA said its monitoring system, as of April 4, had received 169 cases of blood clots in the brain (CVST) and 53 in the veins in the abdomen (SVT), out of a total of 34m doses that had been administered in the European Union and the UK. Most of the cases occurred in women under the age of 60 within two weeks after the first shot.

The regulator said on April 7 it had carried out an in-depth review of 62 CVST and 24 SVT cases, 18 of which were fatal. It said its analysis had found that the vaccine’s benefits outweighed the risks and there was no evidence of specific risk factors such as age.

Even so, Germany decided to suspend its administration for people below the age of 60, a move, experts said, was in line with the “more conservative approach” of the country’s health authority.

Italy did the same, while France and Belgium restrained the vaccine’s use for those younger than 55. Spain, meanwhile, left health experts scratching their heads as it opted for restricting its use for people aged between 60 to 70.

German and French health authorities went further by recommending those who had a first dose of the AstraZeneca jab to use a different vaccine for the follow-up shot, despite little clinical data supporting the efficacy of mixing products.

Norway suspended the use of the vaccine pending further investigation, while Denmark on Wednesday became the first country to remove it entirely from its national vaccination program.

Explaining their reasoning, Danish authorities said that beyond the risk of the possible blood clot links, they could opt for such a move because the epidemic curve is currently largely under control, as well as thanks to the country’s access to the COVID-19 vaccines developed by Pfizer and Moderna.

Indeed, it is this access to alternative offerings that underpins some of these wealthier countries’ decisions in regards to the AstraZeneca vaccine.

“In Germany, we have other vaccines in high numbers, so we can use the AstraZeneca doses only for people older than 60,” said Johannes Oldenburg, professor of transfusion medicine at the University of Bonn.

“In this way, we can make use of all our vaccine resources while lowering the risk of complications,” he added.

However, with the coronavirus pandemic still ravaging the world (recorded global infections per week have nearly doubled over the past two months), experts warn countries with greater access to vaccines should think beyond their domestic audiences and be more responsible with the messaging they convey to nations struggling with shortages.

The WHO estimates that of all doses given globally, an average of one in four people in high-income countries has received a vaccine, compared to one in 500 in low-income countries.

The AstraZeneca vaccine, a “not-for-profit” product cheaper to buy and easier to store compared to other jabs, is seen as key to achieving vaccine equity as it is an essential component of COVAX, a global mechanism designed to ensure that poorer countries get their share of jabs. COVAX aims to deliver 600 million shots, mostly of the AstraZeneca vaccine, to some 40 African countries.

“When the information goes out and you poison an idea, such as the safety of a vaccine, it is difficult to retract it,” said Abdhalah Ziraba, epidemiologist and research scientist at the African Population and Health Research Center in Nairobi.

However, Ziraba noted that in Kenya, a country hit by a major resurgence of the virus and where only 0.7 percent of the population have received a single vaccine dose, people “would rather struggle with side effects rather than needing an ICU bed and not finding one”.

Regina Osih, medical doctor and infectious diseases specialist at the Aurum Institute in Johannesburg, said there should be a “common approach” in addressing such challenges.

“What happened in the UK and US have consequences for other countries,” she said, referring to South Africa’s decision last week to immediately pause its use of the single-shot Johnson & Johnson vaccine after the US suspended the administration of the jab.

The move, which US officials said was done in “abundance of caution”, came after the reporting of six cases of blood clotting, one of which turned fatal. To date, the US has administered about seven million doses of the Johnson & Johnson vaccine.

But while the US had already inoculated about 37 percent of its residents, South Africa has hardly reached 0.5 percent of its population and faces supply challenges after giving up on the AstraZeneca vaccine in February following reports of its limited efficacy against a dominant variant there.

“People were already weary before; now the number of people refusing will increase with serious consequences for our vaccination effort,” Osih said.

“This pandemic has shown us that global solidarity does not exist,” she said, “and that everybody is for themselves”.

This article was originally published in Al Jazeera.