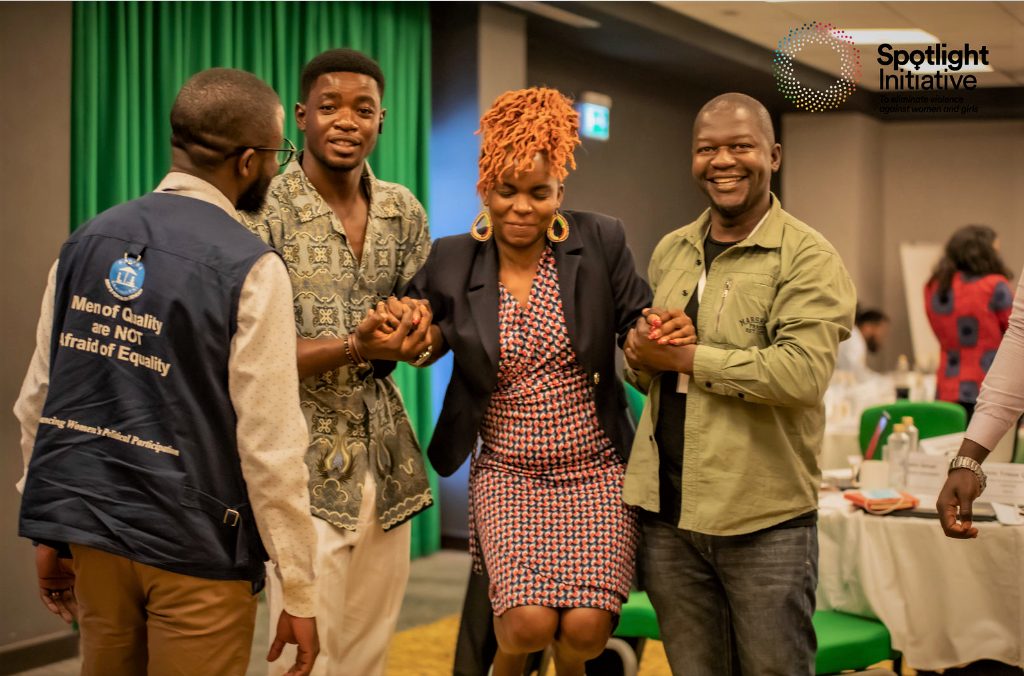 Men’s and Boys’ Networks Dialogue: If you want to go far, go together

For a long time, men and boys have been left out of the gender equality discourse, relegating their role to just being the antagonists of the agenda. They are seen as the oppressor and, in extreme situations, the perpetrator of violence. After several waves of campaigns seeking women’s liberation, it is now becoming clear that unless men and boys are involved in the feminist agenda, the gains will either be delayed or ultimately denied.

The Spotlight Initiative Africa Regional Programme (SIARP) is supporting activities aimed at strengthening the capacity of men’s and boys’ networks on positive social norms change and strengthening linkages of the networks with relevant departments of the African Union Commission (AUC). A consortium bringing together the African Population and Health Research Center (APHRC), the Eastern Africa National Networks of AIDS and Health Service Organizations (EANNASO), and the Population Council Kenya (PC Kenya) is supporting these efforts. The Consortium, in partnership with UN Women and AUC, brought together men’s and boys’ networks, women’s rights organizations, religious leaders, regional partners, and other stakeholders to foster further south-to-south dialogue and knowledge sharing on ways to strengthen the capacity of men’s and boys’ networks to promote positive social norms change to advance gender equality and eliminate all forms of Gender Based Violence but also to strategize on how men’s and boys’ networks can leverage on the work done by women’s rights organizations to achieve the same goal.

During the event, the participants discussed the many roadblocks that women and girls have had to endure and the investments organizations are making to ensure that women live in a secure environment that promotes their health, well-being, and empowerment. The conversation covered areas that are conventional and some that are viewed as controversial in some conservative societies in Africa. The men and boys in the event were eager to learn from one another and were inspired to protect and further the interests of the women folk in Africa. The forum also fostered linkages between these networks and relevant AUC departments.

“Men are the main perpetrators of violence against women and girls. Changing this will require working with men at all levels of society, especially those in positions of power,” said Anthony Ajayi, an Associate Research Scientist at APHRC.

The African Union through the 2021 Chairperson and AU Champion on Positive Masculinity to End Violence Against Women and Girls, H.E. Felix Tshisekedi, has played a notable role in harnessing the power of engaging men in advocating for the rights of women and girls. This message was greatly sounded at the Inaugural Men’s Conference on EVAWG, which was held on the 25th of November last year. The conference was centered on male leadership taking the first steps towards engaging continent-wide positive masculinity to end violence.

“It is no secret that to this day, women and girls remain vulnerable to abuse, despite our recognition that it is deeply wrong and harmful to our collective development efforts. And there is no denying that men are generally the perpetrators of violence against women and girls. Men, therefore, have not only a special responsibility to speak out but also to take action. Gender equality is much more than a moral obligation; it is a right which cannot be ignored,” said Bahdon Ismael, Innovation and Entrepreneurship Program Associate of the African Union Commission.

“Violence against women and girls (VAWG) is affecting our economies because women’s participation in economic activities is limited. This presents a great motivation for governments and even the private sector to engage in the efforts to end VAWG and promote gender equity,” said Sunita Caminha, who serves as UN Women’s Regional Policy Specialist.

The meeting was attended by representatives of civil society organizations from 14 African countries that engage with men and boys to champion women’s rights. Participants noted that based on the prolonged fight for gender equality and the impact of human rights violations on women, such as violence against women and girls, among other harmful practices, the conversation needs to shift and be treated with great urgency.

“Boldness and direct communication should be adopted by champions regardless of who they address. The physical and psychological impact of violence against women and girls demands it,” Winnie Obure, the executive director of TeenSeed, said, rallying her colleagues in the women’s rights movement and male champions to inject passion into their work.

The participants learned that gender is a social construction and that society has contributed to the current state of affairs. It is done in subtle actions, inactions, and decisions. The good intentions behind such actions, inactions, and decisions notwithstanding, the woman has ended up confined in silence, enduring a life whereby her decision-making is limited to only what is allowed by her male counterparts.

“Why would a parent buy a doll for a girl and a toy car for her brother? Such gift choices communicate something, and then we wonder why women only aspire to be homemakers and caregivers while the men are pursuing leadership in government and other spaces of influence,” said Reverend Dr. Lydia Mwaniki, the Director of Gender and Women Affairs at the All Africa Conference of Churches.

“It is the boys who are, for example, pushing their sisters to get circumcised by calling them those prohibited names,” added Rodney Mutombo, the director of the Women Excel Trust.

It was refreshing to see the participation of religious institutions in the discussion, as, in the past, the institutions appeared passive, only presenting a conformist position with the backing of religious texts. A heated debate on the role of women in the family expressed the push and pull struggle that may persist between religion and the feminist movement.

“Is the church, our modern-day prison, that portrays man as the head and the woman subordinate? How can a woman express herself freely if her husband is both her abuser and spiritual leader?” Onesmus Mlewa, the Interim Executive Director of EANNASO, asked, giving the example of the recent death of a gospel artist in Nigeria whose troubled marriage was common knowledge to her close networks.

In response, Reverend Lydia Mwaniki expressed that religious institutions have a long way to go to catch up to the changing times. She acknowledged that the church could be a prison. She noted that the biblical texts that present women as subordinate to men are read selectively to suit a particular narrative. “We are reading these texts in life-affirming ways… I’m a feminist theologian, and I always say if you are interpreting the Bible to oppress, you are better off not sharing your message,” Reverend Mwaniki said firmly.

This type of control has been exercised for such a long time that women have, in some cases, been made to think that the cultural practices are beneficial to them and agreeable to them. This was discussed at length with the participants highlighting the issue of breast ironing that may seem like an attempt to promote modesty but is a form of control over the woman’s anatomy.

“Conjugal rights, marital rape, and sexual consent are conflicting concepts that resonate with society. How can we bridge the gap and create a workable perspective on marital dynamics between men and women?” This question by Mutombo was among the questions that will continue to shape the conversation on women’s rights. Though these questions may be fully answered in the distant future, it is clear that everyone has a role to play in this fight, from the home front to the workplace and beyond.

“It is important for employers to ensure that women enjoy a safe and conducive work environment that promotes zero tolerance to all forms of violence against women and girls and other harmful practices. Employers should go further and ensure that they provide support for women who may be experiencing violence at home,” said Belinda Hlatshwayo, a Women, Peace and Security Advocate working for the African Union Commission.

The two-day event ended with all the participants taking a pledge to end violence against women and girls and promote positive masculinity.