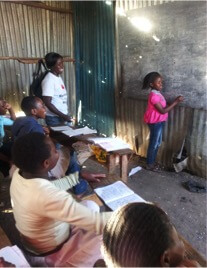 Isn’t it a village feat to see girls thrive in academics and society? More so when the odds are against them, such as in slum areas and impoverished homes? Through a mentorship program dubbed “improve learning outcomes among girls” APHRC is bringing this dream to life. The program enrolls girls from Korogocho and Viwandani slums of Nairobi, Kenya, in grade six through to eight to guide their social development and academic improvement. In addition, the project supports girls who score at least 250 of the total 500 marks in the national examinations – KCPE _ with a subsidy to enable them transit to secondary school.

The first of its kind, the project is as a result of an identified need that girls were either dropping out of school, or those remaining in school were unable to transit to secondary schools due to their poor performance in KCPE, or transited to low quality secondary schools. The project encompasses a holistic approach where girls are mentored on life skills to improve self-awareness and their schooling aspirations; while their parents are shown the support they need to provide to their girls with, to enhance learning. In addition, the girls are supported in their homework and areas where they identify as being weak in by mentors. What makes the project even more interesting is that the mentors are youth from the community who have succeeded in their secondary education, and therefore double up as role models to the girls.

As they say, a journey of a thousand miles begins with one step. In 2013, the first step was taken, when APHRC rolled out the project in collaboration with two community-based organizations (CBOs): Miss Koch in Korogocho and U-tena in Viwandani. As with most novel projects, uptake was slow but steady, filled with reservation from both participants and families, leading to about fifty percent of the girls actively participating in the weekly sessions. With time, they picked up. Each session involved discussions on societal issues – from the basic unit of family, to peers – affecting them, as well as attentive and effective academic assistance. Specifically, the academic sessions focused on numeracy and literacy, which showed the girls how to work out sums individually as well as collectively, and how to spell and read sentences.

The mentorship program in session, with active academic participation by students.

In order to ensure program’s success, the CBOs and mentors continuously interact with the girls. Through this, a trust between the mentors and the girls has developed and continues to grow each day. The feedback is always encouraging and tear shedding. “We really enjoy the life-skills discussions as our mentors are a lot like elder sisters rather than guidance counsellors, so talking about teenage and sexuality is easier,” said Linda Awuor, one of the program’s participants. As an effect of the program, the girls are now able to discuss subjects that were previously taboo, mothers also discuss with their daughters about body changes, and why they need to put extra efforts in their studies. Parents now appreciate the need for supporting their girls to be what they aspire to be, even in the midst of challenges including poverty. “We also, the help we get with school work has moved me from 30% when I joined the program, to 80% now. I know I can sit for my final tests with more confidence,” said Linda.

With this kind of feedback exhibited over time, the popularity of the program has grown. Families now realize the value of this support in the girls’ social and academic endeavors, as a stepping stone to their vivacity. “This program has empowered the parents to be able to talk to their daughters. Even those parents who did not know how to, or what to share with their daughters, now felt that they ae able to sit down and talk to their girls. It has given hope to some of the girls who did not know that they would ever step in secondary schools,” said Dr. Benta Abuya who leads the program.

Even with the progressive feedback and demonstrated improvement in the girls’ performance and confidence, one would imagine the journey would be smooth this was not the case. Some parents didn’t fully understand the importance and purpose of the program, until changes were seen in the girls conduct and performance. Whilst for the girls who blatantly refused to attend the program, APHRC actively pursued them to establish the reasons for their disinterest in the program, and attempted to include and convince them of it. For example, for girls who had extra after-school classes to attend and thus sighted exhaustion, the program implementers involved the administration in the decision to release them early, with diaries to be signed by both the mentor and parent to track attendance.

Only then were the cycles of habit such as household chores and conventional education models like after school tuition, broken.

Preliminary examination results from the first class of 2013 showed that, of a total 270 girls in grade eight – ideally aged 14 years – 71 girls scored the pass mark and subsequently, qualified for the overhead subsidy to enable them join secondary school and this number had increased by more than 20 by the second year.

Members of the mentorship program receive a grant in jubilation.

“This was a proud moment. This concept proved to work because the girls performed well in numeracy, literacy and overall, and thus were going to attend high school. We, the team of implementers can now see the fruits of the initiative in the glowing faces of the girls,” said Shem Mambe of APHRC.

In the next year of implementation, the program soared with 91 girls attaining the pass mark, from a total of 264 girls. This led to Equity Bank awarding some exemplary students with their prestigious four-year scholarship program in their respective high schools.