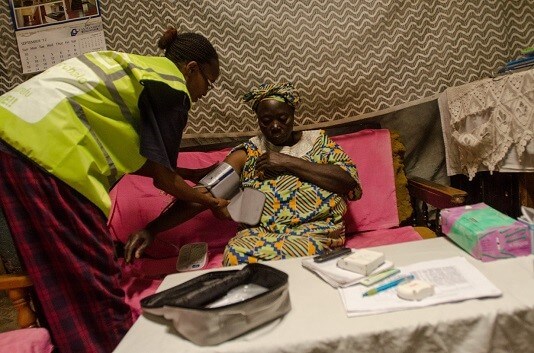 Hypertension Could be the New Epidemic in Africa

“Having a broken heart is awful—having a real broken heart can kill”, said Dr. Steven van de Vijver, Director of Urban Health at the Amsterdam Institute for Global Health and Development.

On May 17, the world marked World Hypertension Day. This year’s theme was ‘Know Your Numbers’ – to increase high blood pressure awareness in all populations around the world.

Non-communicable diseases like hypertension have always been regarded as a disease of the rich – but this has changed drastically in the last two decades. Numbers of high blood pressure patients are now higher in Africa than in Europe and USA – and the disease is more common among Africa’s poorest.

So what exactly is Hypertension? It is commonly known as having high blood pressure and it is the number one risk factor for strokes and heart attacks otherwise known as cardiovascular diseases (CVD), in Africa. Consequently, CVDs have become one of the leading causes of death in Africa and the total numbers will further increase in the next decades reflecting on the growing urbanization and related lifestyle changes of Africans.

Traditionally in Africa, communicable diseases such as AIDS, tuberculosis and malaria as well as maternal and nutritional illnesses, accounted for the greatest numbers of preventable deaths. However, this burden is shifting fast towards chronic non- communicable diseases, including CVDs. This phenomenon is what is being termed as the “double burden of disease”. Whereas high blood pressure was almost non-existent in African societies in the first half of the twentieth century, estimates now show that in some settings in Africa, more than 40 percent of adults have hypertension.

A Community Health Worker checks blood pressure of a slum resident in her home. Out of over 4000 screened by door to door visits, about 1000 were found with raised blood pressure and referred to receive treatment at a Cardiovascular disease clinic set up by the SCALE UP project

The new epidemic of hypertension and CVD not only has an impact on the health of a nation – but has an economic impact as well. A significant proportion of the working age population can become chronically ill or die, leaving their families in poverty.

Like many other non-communicable diseases, hypertension is a silent killer that in general has no specific symptoms or physical complaints. It can only be detected by having one’s blood pressure measured on a regular basis. At this stage of the African epidemic of hypertension and CVD, the most important thing will be to raise awareness about the importance and urgency of knowing one’s blood pressure among the population, patients, doctors and policy makers.

Additionally, the following strategies will be key to controlling the hypertension epidemic:

The authors are senior researchers affiliated with the African Population and Health Research Center. Their research focuses on Non Communicable Diseases and Aging issues in Africa.