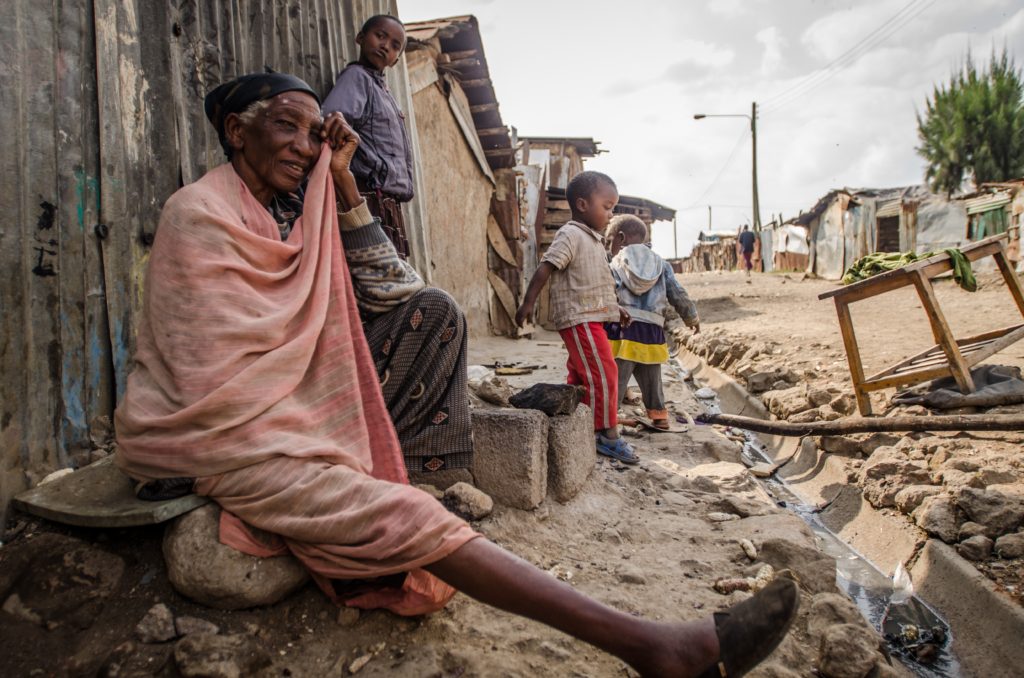 How to Address Poverty Among Older People in Our Society

In a continent that is often described as ‘youthful’ it is easy to forget that Africa has a growing and influential population of older persons that has not perhaps received as much attention from policy makers as it deserves.  However, that trend is slowly changing as countries in Africa recognize that aging is a relevant issue for the future.

An elderly woman from Korogocho, a Slum in Nairobi, takes cover from the scorching sun as she watches over her grandchildren

A recent example of this is the Common African Position on post 2015 development, which mentions population aging as a trend that will impact the continent and requires responses. Then there is the increasingly prominent commemoration of this day, the International Day of Older Persons, which is a further indicator of a growing cognizance of older people in our societies.

Kenya is among a few African countries that can be said to be at the fore in thinking and acting on issues affecting older persons. Kenya’s Government, for example, has instituted an Older Person’s Cash Transfer Scheme that sees older people from the poorest families receive a monthly stipend of Kshs. 1500.

Of course one could easily query the adequacy of this amount, given that the needs of such older persons likely go far beyond what 1500 shillings a month could possibly afford.  But that would be to miss the bigger point, which is that, at the very least, the Government is prepared to act on the older population. It is, without a doubt, a step in the right direction! The next step is to now build on this, and seek to learn how best we can begin to respond to wider challenges and opportunities of aging.

We have no ready models to follow.  Experiences from developed world societies, Asia or Latin America, which have a longer history of addressing issues of older persons , can perhaps offer valuable pointers — but certainly no set answers that are suitable for our unique social, economic and cultural context.

I would suggest that a good starting point may be to begin to reflect on, and develop greater understanding of, the impacts and implications of the cash transfer scheme and how it may be further developed going forward.

In particular, we need to examine for what, for whom and how the extra cash is used – and why?  Who makes the decisions? In other words, what do we know about the cash transfers’ wider ‘development’ effects?

We might also want to look at the impact the transfer may have on intergenerational dynamics within families and households. Many older recipients live with their children or grandchildren and given the high under- and unemployment among youth, it is likely that the scheme is creating a dependency of the young on the monthly resource of their older relatives. Might this lead to tensions between the generations?  And if yes, what are the effects on the well-being of both old and young?

Another set of questions we should begin to consider is more forward looking and requires us to examine the prospects of those who will become old in the coming decades; the middle aged and youth of today.  What forms and scope of income security do they hope to draw on in their old age?  And what needs to be put in place for that now?  What other services and systems will be needed – and what do we need to begin to forge now –  to ensure a ‘good old age’ for present and future generations of older people in Kenya?

When all is said and done, the key to getting it right as far as addressing poverty in old age is concerned will be critical thinking and continuously re-evaluating what we are doing with a view to refining our approaches.

A realization that young and old lead interlinked lives and that questions of ‘old age’ — far from concerning only today’s older people, are relevant to each one of us – is a necessary beginning.   If nothing else, this should be uppermost in our minds on this day.