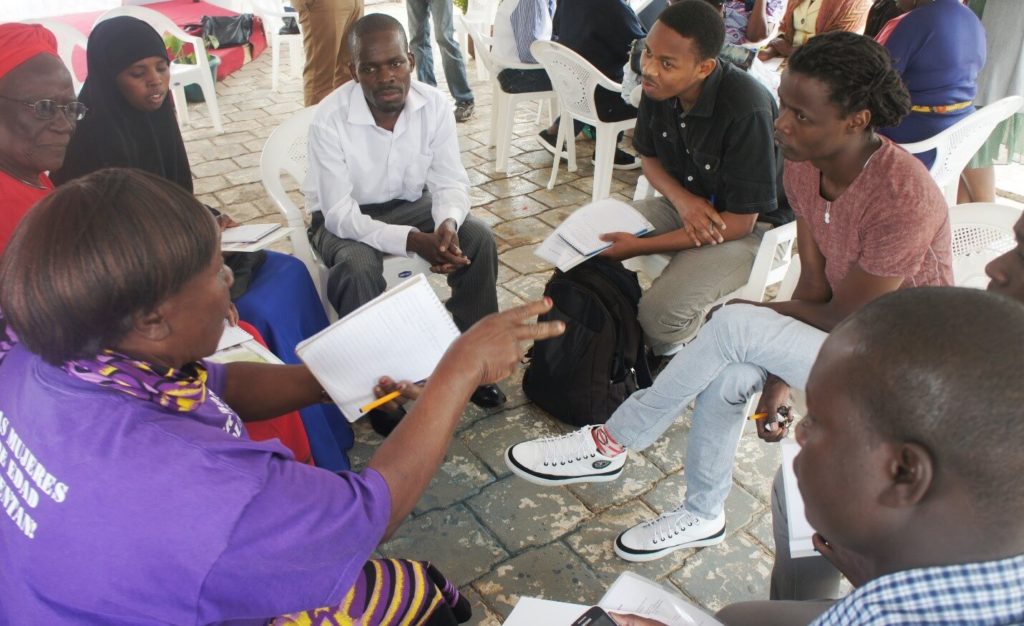 Bridging the Gap Between Nairobi’s Young and Old

Bringing together youth aged between 20 and 35 and older people aged from 60 to over 80, the Aging and Development Program of the African Population and Health Research Center (APHRC) hosted a two-day inter-generational dialogue on October 6 and 7, 2015. The dialogue sought to encourage reflections on the perceptions that elders and youth in Nairobi have of each other, and the joint development of bold ideas for inter-generational cooperation models that will promote the empowerment and education of under-served urban youth by drawing on the capacities of the old.

Highlighting the lack of communication and engagement that are widening the divide between youth and older people in Nairobi, the dialogue used group discussions and the sharing of personal experiences to explore underlying drivers of the gap, the potential benefits of bridging it, and possible ways of doing so.

Pauline Makwaka, the Executive Director of Senior Women Citizens for Change told her story on the challenges she has faced in trying to work with younger people.

Pauline Makwaka, an older person and Executive Director of Senior Women Citizens for Change, told her story on the challenges she has faced in trying to work with younger people.

“A few months ago, I attended a forum on fighting gender-based violence, and when I stood up to speak, the event hosts dismissed me, they did not want to give me a chance. Even worse, the MC scornfully said. There is a ‘kashosho’ (meaning little grandmother) here who wants to speak, I wonder what she has to say. I was extremely offended. Most young people assume that because we are old, we have nothing to offer. They assume that we are not knowledgeable and are not in touch with the modern times.” she said.

Through the group discussions, the event engaged Nairobi residents from all walks of life, from 18-year-old David Mutaha, of LVCT Health who called upon the organizers to take the dialogue further through media to include old and young people across the country, to veteran radio host Fred Obachi Machoka who challenged the youth not to ask what the older generation has done for them but to ask what they are doing for the future generations.

Fred said, “We need to address underlying stereotypes. We are all old. From the minute you are born, you are I day old, 1 year old and so on. Therefore we must build on our collective expertise and mentor each other. The youth shouldn’t just be asking what we have done for them, but should also ask what they are doing for the generations behind them.”

In support of this notion, one of the participants who attended the dialogue author Chambers Umezulike, in reference to his article ‘My Father’s Generation Failed My Generation,’ said, “There cannot be youth empowerment without knowledge transfer from the old to the young. An urgent need to transfer skills, morals and values from wise older people to the young exists.”

Participants noted the need to explore mentorship as a key to economic empowerment and growth. Popular musician Juliani, who works as Amiran’s Poverty Eradication Ambassador through agriculture urged the older persons to mentor the young. “There is a lot that older people can teach the younger ones in agriculture, since they have more experience. This way we can fight poverty and hunger.”

Isabella Aboderin, APHRC’s Head of the Aging and Development Program, reiterated that working together is key to developing sustainable solutions to the problems facing Kenyans.

In her remarks, APHRC’s Head of the Aging and Development Program, Isabella Aboderin reminded all participants of the need to work together to identify and develop sustainable solutions to the problems facing the young and the old. Rallying the participants, she said “Cultivating cohesion and active exchange between younger and older generations could be the single most important ingredient for realizing the economic potential of Kenya in coming years. There could be enormous potential in bringing young and old together in addressing the economic, social, cultural and political pressures in our society – and to build a hopeful, positive future for today’s youth.”

The inter-generational dialogue is part of a joint initiative of APHRC, the UNFPA Population and Development Branch, the International Federation on Ageing (IFA) and the World Economic Forum Ageing, and Demographic Dividend Global Agenda Councils.

The findings and proposals from this dialogue will be shared at the 2015 Summit on the Global Agenda to be held in Abu Dhabi on October 25 to 27. This is the world’s largest brainstorming event, which brings together the most relevant thought leaders of the World Economic Forum’s Network of Global Agenda Councils, comprising more than 80 groups of experts from academia, business, civil society, international organizations and government.