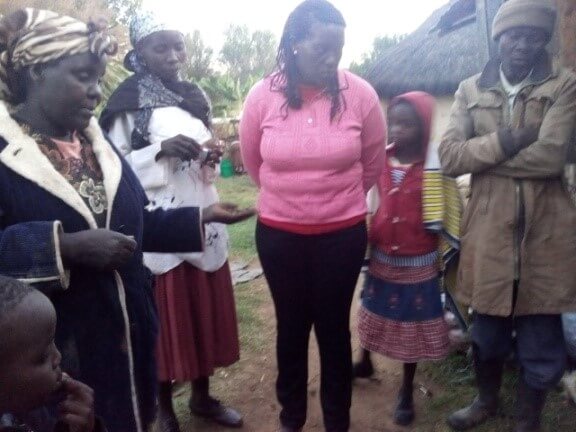 You’ve definitely heard many stories of adults who picked up a certain trade from their parents through the generational passage of indigenous knowledge and practices. In the African traditional society, this was the hallmark of good parenting. Passage of indigenous knowledge from one generation to another was almost an automatic process where the senior members of society inducted the young ones into different kinds of trades in order to preserve the society’s knowledge and to expand it. However, this is not so with a traditional medicine woman I met in Poror village, Koibatek sub county, Baringo County in July of 2015.

Here’s my encounter with the traditional medicine woman 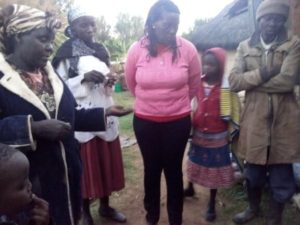 Figure 1: Gogo (with blue blazer) explaining the use of different herbs

The medicine woman, now nearing 60 years of age, in her own words said  that she cannot pass on her knowledge to any member of the family   unless that member has a calling to be a ‘daktari wa kienyeji’ –   traditional doctor. I met her outside her house where I had gone to supervise field work in the ongoing Baby Friendly Community Initiative (BFCI) project in Koibatek Sub County, in which the African Population and Health Research Center (APHRC) is collaborating with Kenyatta University and the Ministry of Health among other stakeholders. The first question I asked upon seeing the thousands of traditional pieces of medicine was, “how do you know which piece of bark, root, leaf or branch is used for which condition?” Without batting an eyelid, she started to explain which bark cures what kind of ailment, which root is an answer to what disease and which stem can be used for prevention of which condition.

Among the conditions that the medicine woman treats include wounds which have not started producing pus. These are cured by placing a piece of bark on top of the wound which makes the wound rupture. This is followed by another kind of plant extract which is boiled and cooled, then placed into the wound to make it dry. Other conditions include cancer, arthritis, constricted blood veins, diabetes, high blood pressure, stomach ache etc. Other than the curative part of her medicine, this Gogo (grandmother in Kalenjin language) also dispenses preventive medicine. ‘Sarget’ a traditional herb is used for giving children as young as one month old to prevent stomach aches and flu.

Did you know that:

What was more shocking was what this ‘Gogo’ said in response to my question on whether she was grooming any of her children to take over her trade. She replied, “No way. Never! Even myself I was not handed down this knowledge from my mother who was a traditional medicine woman. I just developed a curiosity and a strong intuition and whenever I wondered into the forest, I would intuitively know which root, herb or leaf can cure diseases”.

Figure 2: The shed where Gogo keeps her herbs

The most amazing thing also is that none of her family members including her husband knows what herb, root or leaf is for what condition. When I asked her husband what herb is for stomach ache, he offered that he had no idea at all. They all look up to her to prescribe herbs for her clients. My escort, a Community Health Volunteer, mentioned that she does not charge her clients perhaps because hers is a God-given talent. Her clients flow from all the areas of the country including as far as the Eastern part of Kenya, coast, western among other areas.  However, she does not mind being given any kind of gift including money for her prescriptions.

Interestingly, one of her sons is a practising medical doctor working with the Ministry of Health while one of her daughters is studying pharmacy at a local university. Talk about a calling that coincides with the calling of the parents.  Gogo is very proud of her children who have taken up modern medicine and she mentioned that they still consult her on traditional medicine from time to time. I guess there are modern clients still interested in traditional medicine.

So how does she measure the prescription?

I met a young man who works for a micro finance institution who had just been given a prescription for a 5 month old baby (talk of non baby friendly feeding practices… no wonder the message of exclusive breastfeeding for six months has not fully been adopted in Kenya! ).  I asked him what the prescription was for.

Figure 3: An array of herbs for different kinds

He told me it was for preventing stomach ache. How they predict that the baby is going to have a stomach ache is something I do not know for now. Gogo prescribes with her eyes, she gets into her store, picks the specific herb for the specific condition, and puts in several handfuls into a plastic bag and issues instructions which include boiling, cooling the residue and taking a cup every two or three times a day or chewing a specific number of times in a day.

If you thought I would go home empty handed, you are wrong. Gogo noticed that I had flu and she dashed into her store, came up with a dried back of a tree and asked me to chew that for cold, flu and irritation of the throat. To say the bark was bitter is hiding the truth of the matter, it was extremely bitter both for the tongue and for the whole mouth, even my heart protested at the bitterness. I passed by a chemist that evening and bought over-the-counter drugs for my cold…the bitterness of the herbs was too much a punishment!

“So, do people really get healed when they take these herbs?” I asked the CHV. “They do”. She answered, “But faith is really important in the whole equation”. “Even for modern medicine, if you take it and believe that you will not get healed, you won’t”. She added. As we parted ways with the CHV, I was not sure whether traditional medicine works (or modern medicine for that matter) or it is the faith that works!

As a researcher, I can already begin seeing areas for more research, ‘faith-based healing versus traditional/modern medicine’. A comparative study. The methods section would read something like, three groups of patients were observed over a period of 6 months. One group was given modern medicine, one group was given traditional medicine while the last group was asked to rely on their faith for healing….! I don’t know which ethical review board would give ethical approval for this or which donor would fund such a study. But I guess it may be worth trying!