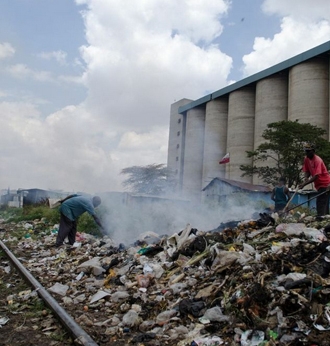 If scientists could more effectively observe pollution from space, they would be able to make better air quality forecasts and more accurately determine where pollution is coming from and how emissions vary. That understanding could also help researchers develop successful strategies to reduce pollution. (NASA, 2013).

Although there is a wealth of information on the health consequences of air pollution, little information exists on the level of air pollution in LMICs (Lower-middle-income countries), in general, and in urban areas, in particular. In Nairobi, Kenya’s capital city, for example, the few studies that have assessed air pollution levels have been conducted along roads and provide a limited picture of exposure levels in residential areas.

Yet we know that air pollution – obviously present in poor urban areas– has been linked to respiratory infections, heart problems, lung cancer and undesirable pregnancy outcomes, such as low birth weight and still births. The World Health Organization (WHO) estimates that air pollution leads to 3.1 million premature deaths worldwide every year. More than half of the global burden of disease stemming from air pollution occurs in LMICs.

Research indicates that young children, expectant mothers, old people, and those with chronic health problems, such as asthma, heart and lung disease, suffer more when exposed to air pollution. The extent to which an individual is harmed by air pollution usually depends on thetotal exposure to pollutants, a measure of the duration of exposure and the concentration of the pollutants.

Slums are a pervasive feature of many cities in LMICs. The level of air pollutants in slum settlements is likely to be higher than in non-slum settings due to close proximity to industries, dust from unpaved roads, poor waste disposal, burning of trash and heavy use of solids fuels such as charcoal and wood. Nairobi as one of the rapidly growing cities is not exceptional from these environmental concerns. Research we have done at the African Population and Health Research Center (APHRC) on the main fuel type for household energy needs in two slums (Korogocho and Viwandani) indicates that 84% of households use kerosene/paraffin, 14% charcoal and 2% use other fuels such as firewood, animal waste and gas. Outdoor air pollution in slum setting contributes to the level of indoor air pollution because of infiltration of air pollutants into poorly ventilated structures.

In response to this gap, APHRC has recently initiated a study on air pollution in two urban slums in Nairobi (Korogocho and Viwandani). This study, which is nested in the Nairobi Urban Health and Demographic Surveillance System (NUHDSS), aims to understand community perceptions on air pollution, and assess the level of air pollution and related health effects. In addressing these objectives, the Center will start monitoring indoor and outdoor air pollution levels in the two slums.

The study provides an important first step in providing community-level air pollution information to policy makers. In addition, it is envisaged that sharing the findings from the study with community residents will create awareness on exposure risk and encourage urban slum residents to take measures to reduce pollution levels in their community.  In the long run, this vital information about urban environments may not only decrease the health burden associated with pollution, but also serve to decrease emissions and mitigate the effects of global warming.