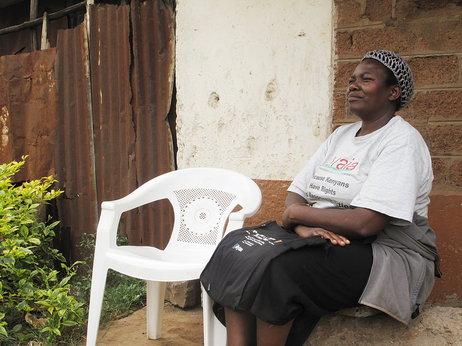 Some blame witchcraft. Others think it’s a bad batch of moonshine. But Esther Okaya, who lives in Korogocho, a slum in Nairobi, Kenya, says even teetotalers are falling victim. One minute quarreling with a neighbor; the next minute, dead.

And it’s happened to her. Okaya’s husband left her. He took the money for her children’s school fees. A few mornings later, her 9-year-old son shuffled home after being turned away by the teacher. And then she felt it. It was as if her heart seized up.

She could not breathe. At the health clinic the next day, a nurse did something to Okaya that she hadn’t seen before: wrapped a rubber cuff around her arm that squeezed and beeped and spit out a number. The number was 148. 148 over 90, her blood pressure. Esther Okaya, age 39, had hypertension, which made her more susceptible to heart attack or stroke.

While hypertension is a condition we might more readily associate with a 55-year-old office worker in an American city, it’s actually more prevalent in Sub-Saharan Africa, affecting nearly 1 in 2 residents over the age of 25. Genetic proclivity to salt-retention may play a role. Another factor is economic good news. As Africans earn more and move to cities and spend more on food, their risk factors start to look more Western.

“People eat either too many calories, or they eat things that have too much salt in them, or they eat things that have too much fat in them,” says Dr. Catherine Kyobutungi, health director for the African Population Health Research Centre (APHRC) in Nairobi. The concern about Africa is not just that so many people have dangerously high blood pressure, but that so few are told they do. And it’s not like blood pressure cuffs are some exotic new technology. Kyobutungi was using them back in medical school.

“In Uganda, yes of course,” she remembers. “It was routine, it was part of the general examination. But now? You’d be lucky if your blood pressure got measured in a public hospital.” Today, she says, in any given African hospital you’re more likely to find out your HIV status and get tested for malaria. Those are the diseases around which foreign donors have poured in money, supplies and training.

Kyobutungi came up with what seemed like a simple plan to solve this. In 2008 she sent out health workers to screen a bunch of people, tell them their blood pressure numbers and offer free medication if they needed it. “Free, completely free,” she emphasizes. “For about 18 months.”

Of the nearly 1,000 hypertensive patients she found in Korogocho, fewer than 3 percent accepted the free treatment. They didn’t think it was important. “So you need someone who can constantly reinforce the message that if you don’t get treated, even though you don’t fall sick, … things are happening in your body,” the doctor says. “Your kidneys are getting damaged, your eyes are getting damaged. Your heart is getting damaged.”

Like when you go to your doctor and have “the talk” about high blood pressure, and then you go home and hear the exact same message on a drug commercial on TV. Kenyans, she felt, needed that level of professional nagging. And she found someone to pull it off. “We talk with people one by one to tell them, ‘You are ready to get paralyzed. You are ready to get stroke,’ ” because their blood pressure numbers are so high, says Helen Onyango, laughing.

If you live near Helen Onyango, odds are she’s knocked on your door and asked to take your blood pressure. The community health worker herself suffers from hypertension.
Photo Credits: Gregory Warner/NPR

Onyango, who’s 50, is a community health worker in Korogocho. If you are over 35 and live anywhere near Helen, then she has knocked on your door, carrying a blood pressure cuff. She’ll talk her way in, take tea with no sugar, and explain to you what a blood pressure number is. “And then you take the measurement there,” she says. “You tell her, ‘Yours is 200 over 100. You are sick.’ ”

A pressure reading of 200/100 is in the zone of hypertensive emergency. In the United States you’d be advised to immediately call 911. When Onyango’s neighbors get this kind of news, they look at her and her machine and say, “I’m okay! I’m not sick!”

It is hard for anybody to take seriously a problem that you can’t feel and that no one is putting money into. There is no Bill and Melinda Gates Foundation for African hypertension. There probably never will be. So Catherine Kyobutungi at the Health Research Centre decided to add the economic incentive. They promised to pay community health workers an extra 100 shillings, about a dollar, for every patient screened who actually showed up at the clinic. And another 50 cents if they came back a second time.

Health workers like Mary Wanjiru thought was a great deal, until she tried to earn it by inviting people to the clinic. “I keep on going back to call them,” Wanjiru says. “They even not come that day. Maybe he shall or she shall come the next month! So you have to wait so that you can be paid.”

Onyango’s not afraid to take hard-line tactics. If a neighbor dies of a hemorrhagic stroke, she’ll visit another neighbor with similar blood pressure numbers to the dead guy. And she’ll say, “You see John is dead. What about your [numbers]?”

And what about her numbers? Onyango is fighting her own battle against high blood pressure. A blood clot impinges on her aortic artery, the result of lifelong undertreated hypertension. “When I walk, I’m feeling like … too tired,” she says.

What makes hypertension such a killer in Africa is that if Helen Onyango were to have a stroke or a heart attack tomorrow, there’s no ambulance that’s going to show up in time. Though she’s scheduled for bypass surgery, she admits that neither she nor her adult children can hope to afford it. Doctors don’t give her long to live. And the same prognosis may apply to many others with high blood pressure. WHO scientists predict that in the next 15 years, as Africa’s population ages, the death toll from chronic diseases like diabetes and cancer and especially hypertension will exceed the death toll from HIV and malaria combined.

While Onyango no longer has as much strength to knock on doors, she’s proud to know that over the last two years, she and about a dozen community health workers, through the enduring power of badgering, increased the number of hypertensive patients under treatment in this slum from 3 percent in 2008 to 17 percent today.

And that success has attracted the attention of people that have an even greater economic incentive than the community health workers. A group of people who in the United States have perfected the art of schooling us on diseases we didn’t know we had. Pharmaceutical executives are in talks with APHRC about scaling up the next group of Kenyans targeted for blood pressure screening from 8,000 to 1 million.