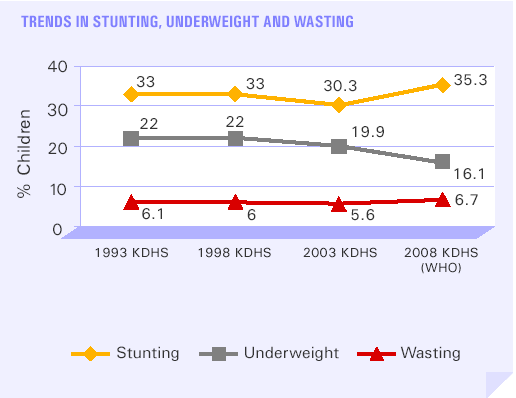 The Nutrition Paradox in Kenya: What Are We Doing?

When one thinks of malnutrition in Kenya or any other African country, what usually comes to mind is stunting, underweight, wasting, and possibly micronutrient deficiencies. Hardly ever do thoughts of over-nutrition, in countries so poor, cross people’s minds, but Kenya, like many other African countries, grapples with two heavy burdens of malnutrition: the burden of the traditional under-nutrition and the burden of over-nutrition.

At the national level, 35 per cent of children under five years are stunted, 16 percent are underweight, and 7 percent are wasted [1]. While the levels of wasting and stunting have remained almost constant in the last 20 years: between 6 per cent and 7 per cent for wasting and 30 per cent and 35 per cent for stunting, there has been a slight decline in underweight from 22 per cent in 1993 to 16 per cent in 2008 [2]. The prevalence of under-nutrition is particularly high in urban slums where, for example, stunting among children under five years is more than 40 per cent [3].

The high levels of undernutrition is occasioned by food insecurity (especially due to frequent droughts), poor access to water and sanitation, infections (especially from diarrhoea, HIV, and malaria), poor maternal nutrition, and poor child feeding practices. The persistence of high levels of malnutrition, particularly stunting, may also reflect poor prioritisation and commitment to nutrition by the government and development partners, hence low budgetary allocation in the past. For example, the government allocated only 0.5 per cent of its limited health budget to nutrition in the 2010/2011 financial year [2].

Malnutrition is clearly a complex problem with multiple causes. Addressing it therefore calls for innovative strategies, as well as political commitment if we are to achieve global targets such as the Millennium Development Goals (MDGs) for 2015 or the World Health Assembly (WHA) goals for 2025. There is need to take a multisectoral approach to both nutrition specific and nutrition sensitive interventions.

Nutrition is no longer just a health problem, but a social and development problem that needs to be addressed collaboratively by different actors, including the government ministries (health, agriculture, gender, sports, culture and social services, finance, education, and water, among others), the private sector, civil society, researchers, and development partners. To accompany the multisectoral action on nutrition should be an effective coordination mechanism, only possible in the presence of strong political commitment, to reap the best out of the efforts. Countries such as Senegal and Rwanda that have implemented multisectoral action in nutrition programming are closer to meeting the MDG nutrition target than Kenya [5].

In an effort to address the double burden of malnutrition, Kenya, like many other African countries, signed up (in 2012) to the Scaling up Nutrition (SUN) Movement [6] which brings together governments, civil society, the private sector, researchers, the United Nations and donors in a collective effort. SUN implements both nutrition-specific and nutrition-sensitive interventions/strategies to address malnutrition. In line with SUN’s objectives, Kenya has drawn up a national nutrition action plan for 2012 to 2017, [7] that outlines 11 strategic objectives tackling both under and over-nutrition. Among these objectives include:

To potentially achieve the objectives outlined in the national nutrition action plan 2012-2017, a budget of approximately KES 70 billion (US$ 824 million) was drawn. Kenya has committed to spending KES 6 billion (US$70 million) over five years to scale up nutrition interventions outlined in the action plan, shared across various ministries including health, agriculture, water and irrigation, fisheries development, and national planning and development [6]. The rest of the money is being sourced from development partners including UNICEF, WFP, ECHO, JICA, EU, UK Aid, World Bank, MI, GAIN and USAID.

To hold the government accountable to ensuring achievement of the objectives laid out in the action plan, there is need for the civil society including the media, non-governmental organisations and human rights advocacy groups to engage and put pressure on the government. With the devolution of government since 2013 in the context of Kenya’s new constitution, whereby 96 per cent of nutrition activities are handled by the county governments, there is even greater need for advocacy at each of the 47 counties to ensure that nutrition is prioritised. For civil society to effectively function, there is need for strong monitoring and evaluation and engagement of users with the findings, which is a key role of the research community.

In conclusion, Kenya, like many other African countries has to put in more and more effort to curtail the heavy double burden of malnutrition before it gets out of hand. Within the wider national policy framework outlined in the ‘Kenya Vision 2030’ [8], which aims to transform the country into a middle income country and ensure a high quality of life for its people, Kenya may be on track to curtailing this double burden of malnutrition. However, continued government commitment as well as that of other actors including the development partners and the civil society to the outlined national nutrition action plan is critical.