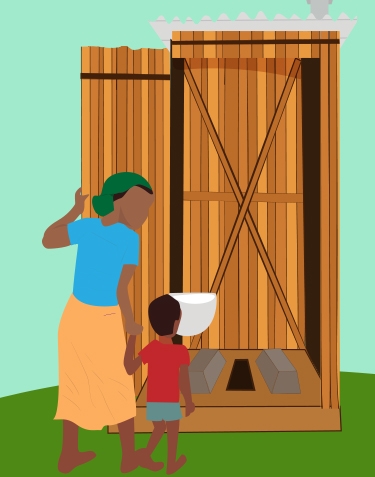 For decades improper human waste disposal, known as ‘flying toilets’, has governed the urban slum; answering a ‘call of nature’ meant using a plastic bag which is then tied up and hurled out, landing wherever it will; be it on a walk-way, roof or a passerby’s head.

Today, the flying toilet fad is fading. Government ministries, development agencies and members of the civil society have invested considerably in initiatives to improve sanitation in urban slums. One such initiative is the Kenya Slum Upgrading Program (KENSUP), a joint venture between the Ministry of Housing and UN-HABITAT, that has constructed public toilets in various slums in Kenya since 2003.  When the project begun UN-HABITAT estimated that 60 to 80 percent of Kenya’s urban population living in slums lacked access to solid waste disposal and sewerage facilities.

In those days, poor waste disposal contaminated drinking water and food supplies significantly contributed to water-borne diseases in urban slums. Research showed that four times more children aged zero to five were dying in slum settlements than in the rest of the population, with diarrhea being among the leading causes of death. Unsuspecting children playing outside their homes were exposed to fecal matter leading to numerous diseases such as dysentery.

APHRC’s Verbal Autopsy data establishing causes of death over a ten year period (2003 -2011) showed that 8.34 percent of all deaths recorded in Korogocho and Viwandani were linked to diarrheal disease.  There has been a significant but consistent decline of diarrheal related deaths in the last ten years ranging from 12.7 percent in 2003 to 10.6 percent in 2011, with the lowest drop to 4.6 percent in 2008.

The improvement in sanitation facilities over the last six years may explain the reduction in death resulting from diarrhea between 2003 and 2011.

APHRC researchers have found a positive link between child health and the changing state of human waste disposal facilities available to residents living in Viwandani between 2006 and 2012. Data from the APHRC’s Nairobi Urban Health and Demographic Surveillance System (NUHDSS) showed consistent improvement in sanitation facilities relating to human waste disposal.

The notable improvements in sanitation in urban slums have been driven by concerted efforts between slum dwellers, government and organizations, like APHRC, that work in these settlements. However, we caution against an early celebration about the imminent disappearance of the flying toilets phenomenon in Nairobi slums. Large sections of the slums remain without private ablution blocks. In addition, the cost of using available facilities amidst ubiquitous poverty may also confine a significant number of residents to poor waste disposal practices when the need arises. This is more so for children whose waste is disposed in all manner of ways including the flying toilet alternative, instead of incurring a cost. Sustained efforts are needed to maintain the momentum of change, win the sanitation war and ultimately reduce the morbidity and mortality linked to poor sanitation among the most vulnerable segment of urban populations.