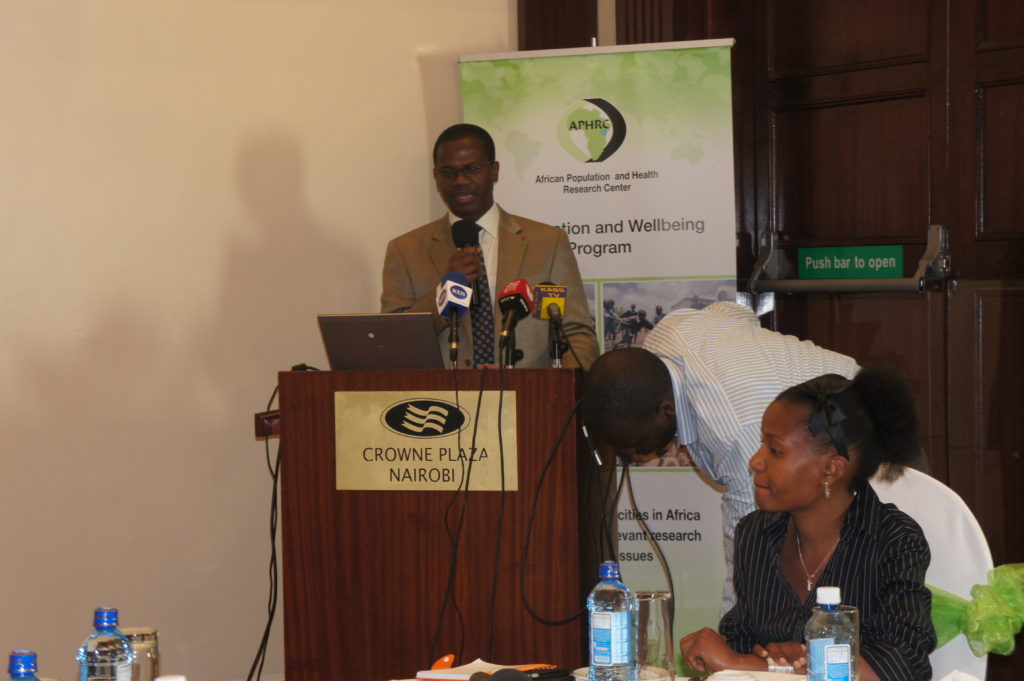 Report on the State of the Urban Poor Launched

A new study has shown improvements in the living conditions of Nairobi’s slum dwellers, while pointing out emerging challenges and areas of focus. The report, known as the Population and Health Dynamics in Nairobi’s Informal Settlements: Report of the Nairobi Cross-sectional Slums Survey (NCSS) 2012, was launched in Nairobi on the 19th of August by the African Population and Health Research Center (APHRC), in conjunction with the Nairobi City County Government.

The NCSS 2012 report documents changes in the living conditions and risks of slum dwellers across Nairobi’s informal settlements between the year 2000 and 2012. It brings to light the plight of slum residents including limited access to education, employment and health, as well as the debilitating environmental conditions that include inadequate access to water, sanitation, poor housing conditions and the near absence of the public sector.

Talking to the media during a briefing held at the Crowne Plaza Hotel in Nairobi, APHRC’s Executive Director Dr. Alex Ezeh noted, “the current report being launched today provides valuable perspectives on existing and new areas of focus so that the well-being of the urban poor can be improved. Among the key areas of focus are education and employment, sexual reproductive health, demand for family planning services, maternal and child health and substance abuse among young people in Nairobi’s informal settlements.”

Speaking at the launch, Nairobi City County Secretary of Health Timothy King’ondu noted that the AHPRC report was an important tool in development planning for the County. “The report highlights marked improvements in environmental, health, and educational indicators among the urban poor, due to substantial attention and resources invested by the County government,” he said. “From the report’s recommendations, it is clear that the county government is committed and willing to partner with like-minded individuals and organizations in facilitating the achievement of the Millennium Development Goals to better the lives of Nairobi residents,” he noted.

According to the report, slum residents remain generally disadvantaged in comparison to the rest of Nairobi and Kenya. Nairobi has over four million residents as per the national census of 2000, denoting continued increase in the number of urban poor. Sustained investment in improving the lives of urban dwellers, particularly the most vulnerable, will be critical in meeting the County’s development goals.

What others are saying about the report: