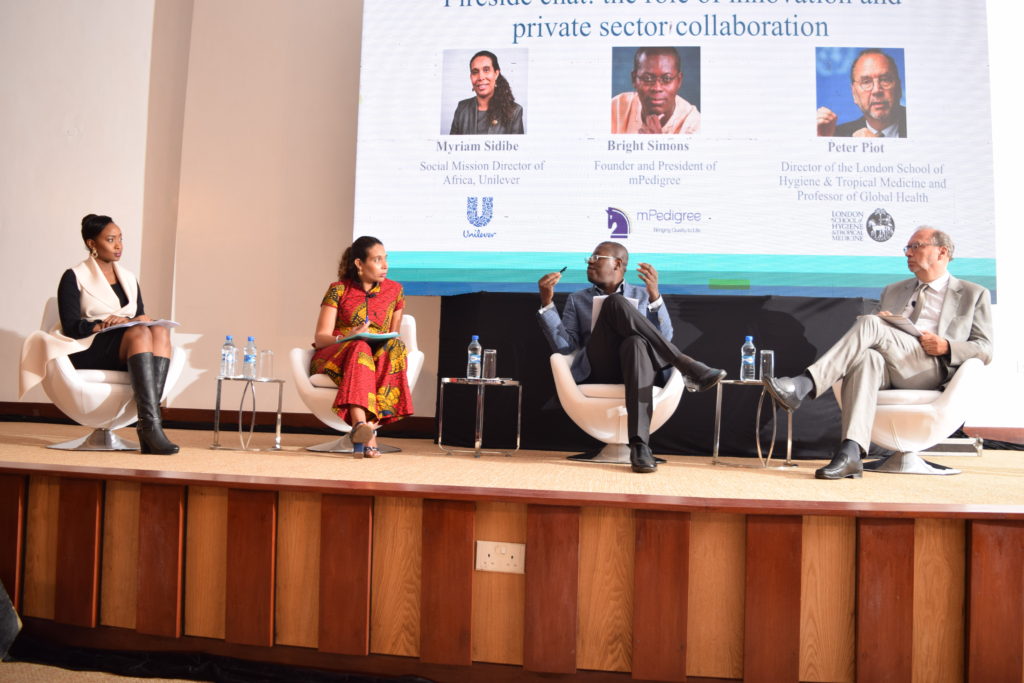 Professor Peter Piot is a global public health legend. A microbiologist by training, Prof. Piot spent decades in Africa pursuing a greater understanding of two of the infectious diseases that have had catastrophic implications for the continent’s development.

He was part of a pioneering team that in the 1970s in Central Africa isolated the Ebola virus and investigated the first known Ebola epidemic. In the early 1980s, also in Central Africa, Prof. Piot led the groundbreaking Projet SIDA that has served as the foundation for global knowledge of the pathology, origins and transmission mechanisms for the human immunodeficiency virus, HIV – which causes AIDS.

In 1992, Prof. Piot joined the World Health Organization as the associate director of the WHO’s Global Program on AIDS. Just two years later, in 1994, he was named the first-ever executive director of UNAIDS in order to steward the global response to a disease that has claimed more than 35 million lives since the start of the epidemic that he was instrumental in identifying.

Since 2010, Prof. Piot has been the director of the London School of Hygiene and Tropical Medicine. It is in this context that he was asked to serve as a Commissioner by The Lancet for a four-year exhaustive interrogation of the future of health in sub-Saharan Africa, in order to develop a roadmap to longer and healthier lives for all Africans by
2030.

Prof. Piot was in Nairobi on 14 September, 2017 for the launch of the Lancet Commission’s report at the APHRC campus. This interview has been lightly edited and condensed.

Q: You have been engaged in research about communicable diseases for decades, but the burden of disease in Africa, as elsewhere, is shifting to include a growing epidemic of non-communicable disease. How should health systems adapt to that shift?

Ideally, [the rise in NCDs] would lead to universal health care, allowing people to be followed at the primary health care level and tested and so on, but the means currently are not there. One of the easiest ways to curb the epidemic is to keep smoking rates low; Africa still has the smallest proportion of smokers globally, but that is under threat. I was recently in rural [Democratic Republic of Congo] and the cigarette promotion there was massive. Stronger tobacco control and regulation is the easiest and most effective prevention mechanism there is. The other problem is that most countries don’t even know that they have an NCD problem – that is, the data are just not there. So alternative ways to respond are critical.

One thing that is working well in Ghana is a program that works through chemists – small-scale pharmacies and dispensaries where staff are trained in taking blood pressure, for example. That goes beyond the regular medical care screenings and takes some of the pressure off health systems that are just not equipped for prevention. Another big problem [contributing to NCDs] is salt – especially here in Kenya! I remember when I lived here [some 30 years ago] and everything was so salty. And that hasn’t changed. So we need regulations – but also education about salt and food.

Promotion of exercise [as in Western countries as a deterrent to disease] is not really realistic in African contexts; people here walk so much already that to some extent that degree of prevention is built into all the cultural contexts. But then they are exposed to greater environmental pollution, which itself is a major health hazard.

Q: As much as African health systems need to adapt to the changing disease burden, they also have to evolve their models of care; we see a lot of task shifting to lower cadres, especially outreach and education programs that are increasingly becoming the purview of community-based health workers who are not necessarily well-trained but
who are well-grounded in their communities. Where are there opportunities in this model and where are the risks?

A: We saw with the Ebola outbreak in West Africa in 2014 (in which more than 11,000 people lost their lives: more than five times the cumulative loss of life from all past Ebola outbreaks) the risks of uninformed health workers being on the front lines of responding to disease.

At the same time, it makes a lot of sense to get tasks shifted to the community health cadre of workers, and leaving the most qualified professionals to handle management and training and referrals. Quality assurance is a major, major component of public health and there are ways to ensure quality at all levels, especially with the leveraging of
new technologies.

There are great examples in places like Tanzania where they are using [electronic tablets] for training and performance management for community health workers. Of course what it does require is a complete reorganization of health systems, which is quite resource-intensive. What we can say is that many of the public systems need to pay more attention to the quality of the services they are delivering, to efficiency and to getting rid of waste. In that way, they can refocus and prioritize how services are delivered.

Q: What do you think is the biggest challenge that Africa’s rapid urbanization is presenting to the evolution of the burden of disease on the continent?

A: So of course there is the rise of chronic disease, but also greater numbers of accidents and injuries. And then of course with the rise of urban slums comes its own set of health challenges. Sanitation is a big issue.

But at the same time, concentrated populations provide a great opportunity [for public health mobilization and campaigns]; they are easier to reach, and while community cohesion may be less and resilience [to shock] may be less than in rural areas, there is still opportunity to reach larger populations and contain epidemics. That’s really the research we need, to see how we can adapt our public health mobilization to the urban, and especially the slum, context. Traditional global health has focused on rural areas but with the majority of people living in cities now and in the future, we need a better understanding of what works – as well as in terms of urban planning and road infrastructure and so on.

Q: The London School of Hygiene and Tropical Medicine has a global reputation for excellence in research, but also for the way it draws people from around the world to collaborate. What tips would you share with APHRC to help us garner the same kind of profile?

A: We’re 120 years old, so we’ve had a lot longer to do this! But I will say that APHRC is one of those rare regional institutions, especially in Africa, with an enduring reputation for high quality work. You’ve got a diverse staff complement, including representatives from West Africa, and are doing great work in developing partnerships. Adopting new technologies can only lead to more opportunities – such as online learning.

The key is for you to have a vision – where do you want to be in the next 10 years? And work towards that while maintaining the same standards of quality and excellence.