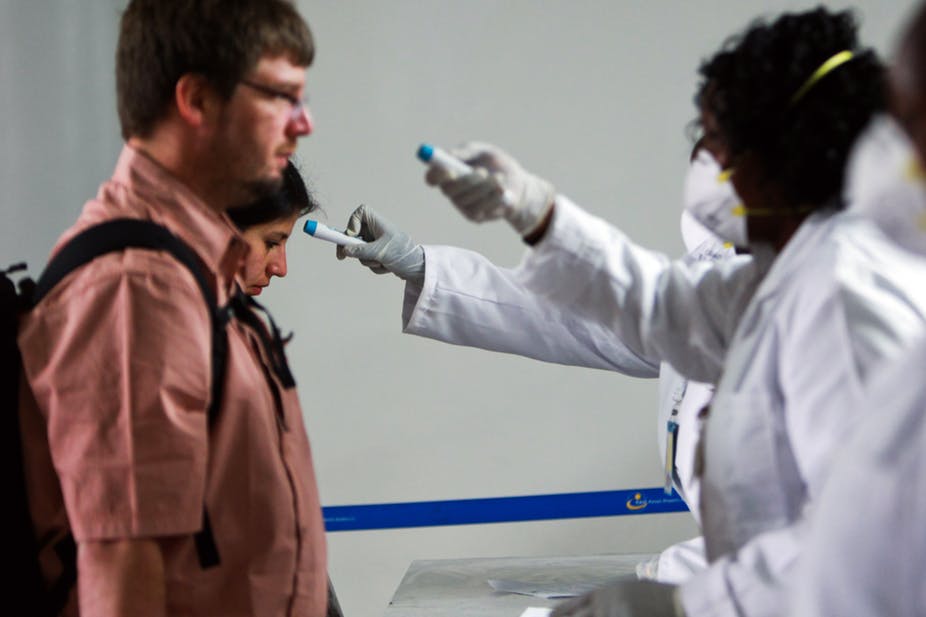 Perspectives from Kenya and Ghana on coronavirus preparations

Chinese officials have identified a novel coronavirus which belongs to a family of viruses that cause illnesses ranging from the common cold to more severe diseases. Countries across the world have heightened their disease surveillance systems and, in some cases, issued travel advisories. The Conversation Africa asked experts from Ghana and Kenya about their preparedness.

What measures need to be put in place to contain the virus?

Abdhalah Ziraba, Kenya: Public health education, particularly for travellers and airport public health staff, is critical. National newspapers and broadcast channels, as well as various social media outlets, should be used. People in all countries, not just Kenya, need to be made aware of the symptoms which include fever, cough, difficulty breathing, sneezing, and body aches.

The other important intervention is to maintain vigilance at entry ports to screen for fever and vet travel histories, particularly incoming flights from China and the region. Kenya has announced that it will screen all passengers arriving from China and increased the levels of vigilance at all entry points.

All suspected cases need to be assessed further. A major consideration will be whether someone has a history of traveling from Wuhan, the Chinese epicenter of the outbreak, and other cities that have reported cases or being in contact with a person suspected of having the disease.

After being assessed, any suspected cases should be reported to the country’s health authorities immediately, and the subjects isolated and managed as per protocol.

Peter Kojo Quashie, Ghana: A number of measures need to be put in place. Due of the previous and ongoing response to Ebola, some measures are already in place.

On top of these, additional steps should include:

What systems, already in place to deal with Ebola, will come in handy? What more needs to be done?

Abdhalah Ziraba, Kenya: Airport public health officials have got better at screening at ports of entry, especially for international arrivals. Basic screening is done using thermal cameras to detect fever. Kenyan officials have the equipment in hand and the trained personnel to swing into action fast.

Public health officials need to vigilant and have a high index of suspicion to be able to identify potential cases. They will then be able to flag travelers who seem unwell, more so if they have a matching travel history.

To support their work, public health authorities also need to mobilize a rapid surveillance and response team so that they can manage any suspected cases- including taking samples, isolation and reporting on developments.

Peter Kojo Quashie, Ghana: Temperature screening protocols have been in place since the onset of the 2014 Ebola crisis. I believe they need to be revisited to screen at a lower threshold (for example temperature > 37.5C) to avoid missing patients who are just beginning to show signs of the disease.

Scientists in the national influenza control lab at the University of Ghana have written standard operating procedures and testing protocols to allow for rapid laboratory detection of this new virus. This effort, in collaboration with Ghana Health Service, the Africa Centres for Disease Control and Prevention and the West African Health Organisation, has been ongoing since the virus was first detected.

Steps that were effective during the Ebola crisis and helped reduce the spread of the virus included hand washing, as well as educating the public about what precautions they have to take for their personal and public health.

What lessons can African countries bring to bear given their experience of handling outbreaks like Ebola?

Abdhalah Ziraba, Kenya: Many countries are now readying themselves to mount a response bringing together specialists and other players from different sectors with centralized coordinating. Several countries also have epidemic outbreak response plans in place, as well as resources and facilities to deal with situations like this. But the comprehensiveness of these varies greatly.

Finally, with lessons from the Ebola, SAR and MERS outbreaks, there is a greater ability to coordinate a response and to keep the public accurately informed. This prevents a panic situation that often fuels the spread of outbreaks. Public health authorities are now more likely to avoid knee jerk interventions not supported by evidence. These can often be counterproductive, as was the case with the Ebola outbreak in West Africa.

Peter Kojo Quashie, Ghana: There are significant differences between the Ebola virus and this coronavirus. First, the spread of Ebola was limited to villagers who crossed the border freely, health workers, and a few immigrants who visited their villages and then returned. Second, it is transmissible by bodily fluids and requires direct contact with an infected individual or surface.

If the latest coronavirus virus is transmitted like MERS or SARS, then it transmits like a the common cold. It is therefore likely to be much more infectious than Ebola.

Fortunately, the preparedness of most African countries were not tested during the West African Ebola epidemic. Unfortunately, that means infection control protocols were never challenged.

In terms of a rapid laboratory diagnosis, we have protocols in place and skilled laboratory personnel. But we have to effectively isolate the risk. That’s the part that must continuously be worked on and reworked.

We should look at how countries like Canada managed to track down infected people and keep the SARS epidemic in check in 2003. In addition, the WHO protocols published in 2004 for SARS will be more effective than protocols for Ebola. Lessons learned from the still ongoing MERS epidemic would be useful, as well as understanding the issues of stigma and cultural issues that are the main challenges of the response to Ebola in Africa.

Other things to consider are the fact that, unlike SARS and unlike Ebola, there are reports that patients infected with 2019-nCoV are infectious even during the incubation period before they get a fever. This would mean that temperature screening won’t work. What would be required is stronger, and different, terminal and individualized screening.

But there are a few recommendations for personal safety that were effective during the SARS and Ebola outbreak. These included avoiding large crowds and stuffy areas as well as not shaking hands. Health sector workers should use enhanced personal protective equipment and change gloves regularly. Finally, masks can help. But they should be changed regularly and disposed of safely.

Lastly, if you have cold or flu-like symptoms and have been in contact with travellers from China, alert public health officials and avoid non-essential contact with others.