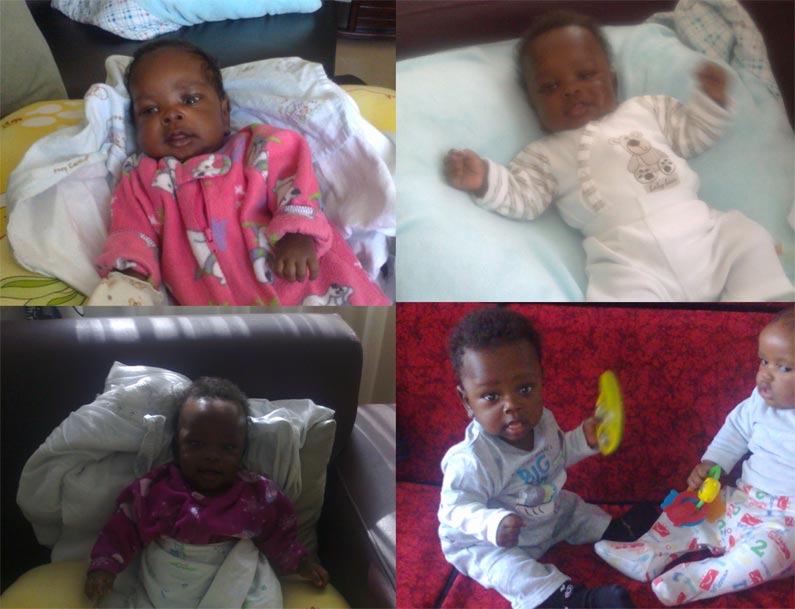 My Experiences as a First-Time ‘Preemie’ Mum.

The day was Tuesday, July 17 2012, when I discovered that I was expecting. Inevitably, as most mothers will do upon such a discovery, I calculated my EDD (Expected Delivery Date) and discovered that we would share a birthday month with my son; in fact our birth dates were just three days apart! I immediately set about preparing for the baby; shopping and clinic visits. Days soon turned into months and the year slowly coming to an end.
NJOGU & I

My last tweet on 31st December 2012 was #Finish the year strong. Finish the year in faith too because that is your key to starting a victorious new year! Unknown to me, I was slowly going into labor and was dilating, even as I tweeted. On the 1st of January 2013 at 6.50pm, I checked into the Nairobi Hospital fully dilated and ready to deliver. I gave birth to my son Njogu naturally and within ten minutes of delivery, he was taken away from me and I had to wait until the following morning to see him. He was so tiny, weighing all of one kilogram. For me, that was the best New Year present in the world.

‘Preterm’ refers to babies born alive before the 37 weeks of pregnancy are completed. Such babies are often referred to as ‘Preemies’. After three days, I was discharged from hospital and it’s difficult to describe how strange it felt to give birth and leave the hospital without my son…

Thereafter, the excruciating visits to the hospital began, checking-in the morning and leaving in the evening every day. Njogu was in ICU for the first five days and was then moved to the neonatal intensive care unit, usually shortened to NICU, which is a unit of the hospital that specializes in the care of ill or premature newborn infants. I had to express milk as he was being fed using tubes through his nostrils and would feed every three hours; a feeding pattern he has retained to this day though mercifully, not at night. This went on until he was about 1.8kg and was moved from the incubator to the cot. I taught Njogu how to breast and cup feed and he caught on quite fast.
The period I spent at home, away from him, felt like eternity and the daily visits were emotionally and physically draining. My milk supply started to diminish as I was constantly on the move and the nights were short as I had to wake up and to express milk. At times, the fatigue was so great that it would lead to sleep deprivation. However, everything that has a beginning has an end and on 13th February 2013, 43 days after Njogu was born, we were finally discharged from hospital. By that time, the young man weighed 1.94kg.
It has often been said that endings are not bad things because they just mean that something else is about to begin. My beautiful motherhood journey REALLY began on discharge and what an awesome one it has been!

Njogu continues to grow every day and I am in awe of God’s work in him. He loves being outdoors and enjoys the sun, nature and little children like him. I often think that given his lively personality, he must have found it difficult to stay inside the womb for nine months. He particularly loves seeing things fall down, get picked up and then dropped again. No, he usually won’t be trying to drive you mad, just that he finds that process very amusing and wants it to be done over and over again. His development has been slow or in the technical term used, he has had ‘developmental delays’ (Developmental delay is a slower-than-usual progression toward childhood milestones such as sitting up, crawling, walking, and talking).

At his age, he is expected to stand upright, crawl or walk; Njogu can only sit up and roll over. This is a common scenario with preemies as they routinely fall behind on reaching their milestones on a timeline based, not on actual birth date but on due date. He is undergoing occupational therapy and I am sure he will eventually get there. I have chosen to feel blessed and not stressed and acknowledge the fact that each baby is an individual and that all babies are unique and meet their milestones at their own pace.
So what has motherhood taught me so far?
1. It’s exhausting. I thought reading for exams, writing term and project papers, or sitting in for long meetings was tiring but I was so wrong. Nothing compares to motherhood. Motherhood means that it’s normal to get tired, for your muscles ache. It’s very normal if you’re completely worn out. The nights can be really long; but it all comes to an end someday.
2. It’s lonely. The coffee dates and the weekends become history and one really misses the normal everyday things of the real world. In addition, I was grounded in the house, actually in the bedroom, for the first two months until when the baby’s immune system had stabilized.
3. It’s beautiful. Many a times, I have the choking-back-happy-tears moments and marvel at how far he has come. It’s moments like these that I wonder how did I get so lucky?
In addition, I have joined numerous blogs on motherhood and premature support groups which have provided tremendous support and loads of helpful information on this beautiful journey of motherhood.
And after all said and done… my son is a carbon copy of his dad and nowhere close to resembling his mum. Maybe I will have better luck next time…
PREMATURITY FACTS
1. The earliest ‘Preemie’ to ever survive was born at 21weeks. The smallest ‘Preemie’ to ever survive was born weighing 0.25kg
2. The average first year medical cost including both inpatient and outpatient costs are about 10 ten times greater for pre-term infants than for full term infants.
3. The rate of premature birth increased by more than 20 percent between 1990 and 2006.
4. Famous preemies include Albert Einstein, Isaac Newton, Mark Twain, Sir Winston Churchill, Victor Hugo, and Napoleon Bonaparte.

The pictures below capture the journey of little Njogu. Born pre-term on the first of January 2013, he is now 10 months old.