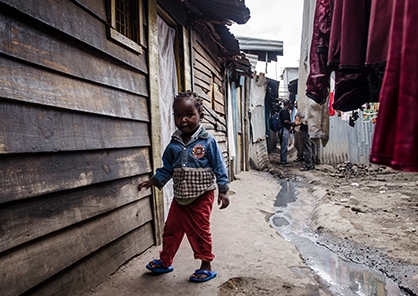 According to Dr Steven Van de Vijver, from the African Population and Health Research Centre (APHRC), 72% of the African population are in city slums and the Gini coefficient in Johannesburg is 0.73.

He spoke of these statistics and the APHRC’s urban slum research, done in Nairobi, Kenya, at the fourth interacademy medical panel (iamp) conference. The conference was about the changing patterns of Non Communicable Diseases and took place at the Crown Plaza in Rosebank, Johannesburg.
Van de Vijver presented data on the first longitudinal platform in Africa: The Nairobi Urban Health and Demographic Surveillance System (NUHDSS). The NUHDSS monitors NCD’s and collects data to monitor the burden of disease in the urban slums of Korogocho and Viwandani in Nairobi, Kenya. The data is analysed through verbal autopsy, by medical doctors, epidemiologists and statisticians. In addition, the centre focuses on infections, NCD inter-linkages, critical health system needs and challenges. Plus, global environment change and its health impacts.
A population of 75 000 is under surveillance. Some are analysed through house visits that occur every four months.  The platform provides data for additional, satellite studies.
Furthermore, the satellite studies includes the Cardiovascular Disease project (CVD), World Diabetes Foundation (WDF) project the SCALE-UP (Sustainable model for Cardiovascular health by Adjusting Lifestyle and treatment with Economic perspective in settings of Urban Poverty) project and the forthcoming AWI-Gen project.
The Cardiovascular Disease study is a cross-sectional survey from 2008-2010. The survey uses a questionnaire on behavioural risk factors and clinical measurements. 5190 participants aged 18 + from the Nairobi Urban Health and Demographic Surveillance System.
The CVD study reveals that diet habits, linked to NCD’s shows up insufficient intake of fruits and vegetables while 37% had a high salt intake. To add, hypertension prevalence was 18.4% and diabetes mellitus 4.4%.
From the CVD project, the WDF project was born. The project ran from 2009-2012. And two outreach clinics were erected. The project runs fortnightly to manage diabetes mellitus and hypertension. Initially the medication was introduced. However, due to sustainability, medication cost was introduced which became a barrier for the patients. 67% of the candidates dropped out early. Toward the end of the three year period 87% of the hypertension patients and 63% of the diabetes mellitus patients dropped out.
When asked about which project was most notable, he said to pay particular attention to the SCALE-UP project. SCALE-UP is an implementation research project to develop and evaluate a cost friendly model for CVD prevention for the urban poor in slums. The project will only help patients over the age of 35- as majority of the hypertension patients are in that age group.
In a few months, a new project funded by the H3Africa initiative, called the AWI-Gen (APHRC and Witwatersrand university In depth) project will commence. The project is in affiliation with Witwatersrand University and will evaluate and compare genetic and genomic associations of body composition and cardio metabolic risk in the African population.
Van de Vijver said that unique factors were uncovered when
monitoring NCD’s in urban areas. He said that a healthy balance was needed between implementation vs. observational research. To illustrate, “The environment needs to benefit from the research,” he said. Additionally, there were challenges in sustainable health care financing. Plus, the studies found that patients would drop out because of lack of funds for medication.
Moreover, data collection had to be customised to the context. “For example, due to security you can not work at night or alone in specific areas. Also, during the week, people are looking for work so Saturday and Sunday are the best days to collect data,” Van de Vijver said.
The challenges of scientific monitoring in urban slums are infrastructure, mobility, social cohesion, local politics and human resources. “There are no official public health facilities there, so you cannot coordinate your research from there,” Van de Vijver said.
Despite the challenges experienced in these studies, they have added information to the scientific body of evidence, which may in future, help other African countries to plan for prospective research in similar environments. In closing, “Valuable outcomes were unpacked to fill in the black box of NCD’s among the urban poor in Africa.” Van de Vijver said.
Resep Masakan