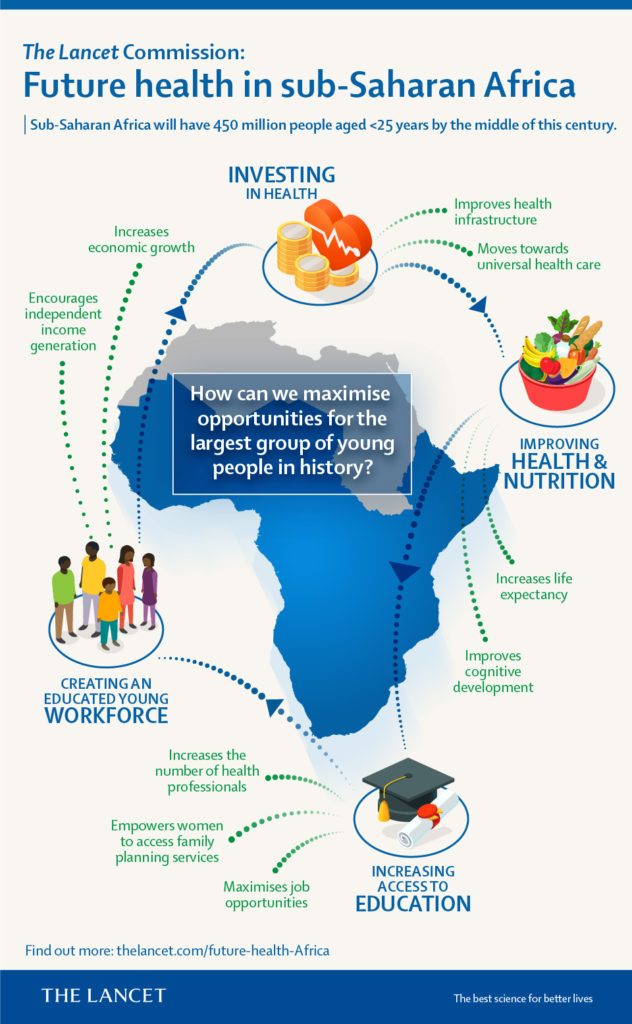 Long and Healthy Lives for All Africans Achievable Within a Generation

Fairy tales are usually not the subject of discussions at scientific research institutions. But on September 14, 2017, Dr. Richard Horton, Editor-in-Chief at The Lancet brought up the subject in his opening remarks at the launch of the Lancet Commission report on the future of health in Africa.

“Sub-Saharan African countries have been described as a group of sleeping beauties, under the influence of a cruel fairy hoping for a Prince Charming,” he said in his keynote remarks at the APHRC campus. “However, the message of the report is one of hope: the continent can attain the same opportunities for health and long life as the rest of the world by 2030.” To realize this vision, a radical shift in policy and practice is necessary.

The report which is titled, The path to longer and healthier lives for all Africans by 2030 is the culmination of four years of work by a group of health and policy experts, most of whom work or are from the continent. According to Horton, the timing of the report launch could not be better, as it comes a few months after the appointment of Dr. Tedros Gebreyesus from Ethiopia as the new head of the World Health Organization (WHO).

“This is a political moment for Africa. Medical knowledge on its own will not make a difference, political leadership and advocacy will,” Horton said to the more than 150 people assembled for the launch of the report.

Prof. Nelson Sewankambo from Uganda’s Makerere University, discussed the twelve strategic options that all countries in sub-Saharan Africa should consider if they are to attain health outcomes that are on a par with the rest of the world. He urged African countries to build on the momentum they had made in working to meet the Millennium Development Goals as they transitioned to the Sustainable Development Goals (SDGs).

He reiterated Horton’s message on political will by stating that governments need to direct more funds not just to their healthcare systems, but also towards research, innovation and higher education. Sewankambo emphasized the importance of customizing the twelve strategic options to the context of specific countries, noting that the Commission did not recommend blanket implementation of the strategic options.

Later in a panel discussion, event moderator Janet Mbugua, asked former APHRC executive director, Dr. Alex Ezeh, to identify the key takeaway from the report for African governments. Because of his own passion for the development of research capacity, Ezeh spoke of the need for homegrown solutions that foster stronger cross-national collaboration.

“Most money for research in Africa comes from outside the continent. Besides that, African research institutions barely collaborate with each other, only 3% of research is done in partnership with other African institutions.” Ezeh said. “Africans need to believe in themselves and their work and not just endorse work that is done by Lancet or the London School of Hygiene and Tropical Medicine.”

Given the report’s focus on Africa’s future, it is not surprising that it highlights the role of young people. By 2050, sub-Saharan Africa will have an estimated 450 million people under 25 years, which would be the largest cohort of young people ever recorded. Bright Simons, the Ghanaian founder of a medical supply start-up, noted that translation of the continent’s threats into opportunities will only happen when young people and innovators are placed at the center of these issues.

African governments can maximize opportunities for their young people by investing in their health and education. These investments would create a virtuous cycle and have numerous positive impacts, not just on the continent’s health but also on its economic development. Many African countries often do not have adequate resources to allocate towards these investments, and so strategic decisions will have to be made in partnership with other sources of funding such as international financial institutions and aid organizations.

The report launch was co-chaired by The Lancet, APHRC and the London School of Hygiene and Tropical Medicine with the support of Unilever’s Social Mission office. This joint effort demonstrated the type of cross-sectoral collaboration that is needed to transform the health outcomes of Africa’s people, today and in the years to come. The launch also featured prominently in media platforms across the continent, with the hashtag #FutureHealthAfrica trending on social media throughout the day.

Africans can have the same opportunities for health and long life as the rest of the world by 2030, this is no fairy tale. But as Horton made clear in his remarks, if governments do not make the necessary investments, innovation and political will, there will be no happily ever after.