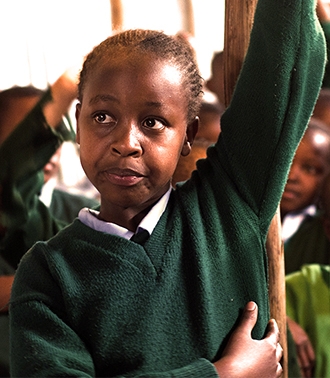 Launch of the Book Urbanization and Education in East Africa

APHRC’s Education Research Program launched the book Urbanization and Education in East Africa on the 19th of September 2013 at Kenyatta University. The launch was presided over by the Deputy Vice chancellor of Kenyatta University was attended by Dr. Alex Ezeh, the executive director of APHRC.

East African governments have been advised to use low-cost, non-governmental schools in urban slums to extend the reach of universal primary education to urban slum dwellers. Speaking during the launch of the book ‘Urbanization and Education in East Africa’ that focuses on the impact of urbanization on education provision, researchers from the African Population and Health Research Center pointed to growing urban inequalities in the region that were hampering access to universal primary education.
During the launch at Kenyatta University that was attended by senior academics, government officials and education experts, the researchers pointed out worrying trends such a steady decline in the quality of education offered in urban informal areas compared to what is offered in the formal areas in all five East African countries. If unchecked, it would have a negative impact on the development of the respective countries.

“Although Rwanda, Burundi, Uganda, Tanzania and Kenya have different policy environments, we are seeing the urban poor in all these five countries struggling with the same issues around education; access to universal education and the quality of education offered.” said Dr. Moses Ngware, one of the editors of the book. Some of the reason why the urban poor in the region struggle to access universal education include inadequate numbers of public schools and the high opportunity costs of schooling.

Dr. Ngware pointed out that the five countries have an almost identical subsidy system to give poor students access to tertiary education and wondered why a similar system could not be used to give students from poor urban households access to basic education.

Rapid urban growth is a common feature in all East African countries and this uncontrolled growth has led to the rise of urban informal settlements, or slums as they are more commonly known, in the cities. These slums create challenges to policy makers when planning for provision of housing, schools and other basic amenities.

The book makes a series of recommendations on how governments can tackle these challenges of access and quality of education under their respective universal education programs.

Also speaking at the same launch, the executive director of APHRC Dr. Alex Ezeh emphasized the need for policy makers to use scientific evidence when formulating policy, something which he said would lead to better policies and hence a higher quality of life for people living in the region and Africa as a whole.

The book was compiled and edited by Professor Moses Oketch and Dr. Moses Ngware working through the Education Research Program of APHRC.