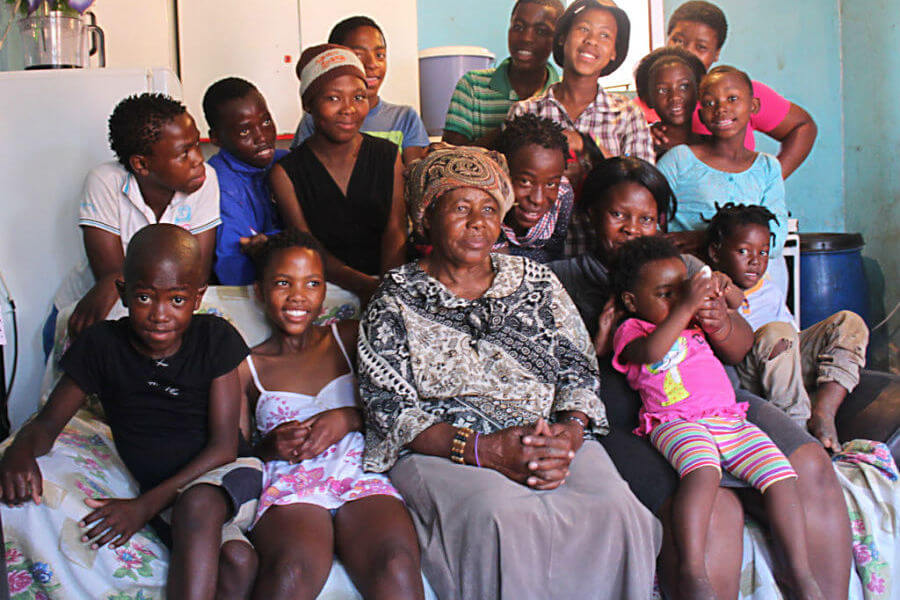 In Dramatically Young Africa, Elderly Are a Valuable Resource

By Ryan Lenora Brown, via The Christian Science Monitor

In Novusumzi Masala’s life, there are 13 of everything – 13 pairs of battered shoes scattered around her tiny two-bedroom house, 13 bowls stacked high above her sink, 13 stacks of homework to puzzle over every night.

But the 13 small lives set into orbit around her own are not her children. Instead, at age 78, Ms. Masala is busy raising a baker’s dozen of her grandchildren, scrambling to keep pace with everything from the rap beats thumping from their tinny cell phone speakers to the schedule of their anti-retroviral medicines and doctors’ visits.

“This isn’t how I pictured my old age,” she says, laughing, as a pair of toddlers scurries over her feet. “But I keep up. These are my family – I could never say no to them.”

Sub-Saharan Africa is, by global standards, a dramatically young region: 60 percent of its population is under 25, and there are 12.9 people on the continent between the ages of 20 and 64 for every one person over 65. (Compare that with Europe, where there are four young adults for every older adult, or Japan, where there are just two). Africa’s population, meanwhile, is growing faster than any other region on earth, and by 2100 the UN predicts that one in four people on the planet will live here.

Depending on whom you ask, the continent’s so-called “youth bulge” is either a spectacular opportunity – with the potential to be an engine for massive economic growth – or a ticking time bomb. If the continent’s vast supply of youth grow up to become a vast supply of unemployed adults, after all, it could spell social and political disaster across the continent.

But one solution for how to create opportunity for the continent’s young people may be, ironically, to look in other direction, to its elderly – and particularly men and women like Masala.

“There’s often a perception that older people are vulnerable, frail, and irrelevant to what happens to young people, but we know that in reality the lives of older and younger people are closely linked – there is a skills and knowledge transfer there that needs to happen for society to function,” says Isabella Aboderin, a senior research scientist at the African Population and Health Research Center (APHRC) in Nairobi.

Aiding youth by aiding the elderly

In South Africa, where nearly 1 in 5 people is HIV positive, the link between the old and the young is particularly intimate. The country has approximately 3.7 million orphans – half of whom lost their parents to AIDS – and 8 percent of all children here are being raised by their grandparents, according to Statistics South Africa. (Continent-wide, UNICEF estimates that half of Africa’s 132 million orphans live with their grandparents.)

For Joey Manane, who runs a Soweto-based youth organization called Ikusasa Lethu (“Tomorrow is ours”), that link is an essential one. He has come to consider providing support to elderly caregivers in his community an essential part of his work to support young people.

Three mornings a week, when the kids finish breakfast and filter out of his center to head to school, the local grannies begin trickling in, ready for a day of crafts, support groups, and sports.

“We have a very good granny soccer team,” he says.

The logic behind having programs for the elderly at a youth center is simple, he says. “It makes our work with the kids so much easier if their ‘gogos’ [grannies] feel supported.” He estimates that about 60 percent of the youth he works with, who come from HIV-affected households in the surrounding community, are being raised by grandparents.

At the Masalas’ house, a vivacious young counselor from Ikusasa Lethu named Angelina Majoro also drops in once a week to check on Novusumzi and her grandchildren – who range in age from 2 to 17. Sometimes she assists with homework, meal prep, or family budgeting. Other times, she just sits and listens to the granny’s frustrations – raising 13 children when your only source of income is a small grant from the government is not easy, she vents, and she wishes they could move into a bigger place.

“It’s helpful to talk so I don’t bottle things up,” Masala says.

The need to prepare

Although Africa’s population remains tilted toward the young, Masala’s demographic is also rising in size. Africans, like people everywhere in the world, are beginning to live longer, and over the next 35 years, the percentage of the population over 65 here is expected to triple to about 10 percent, according to the UN.

But the continent’s demographics also put it in a unique position globally. Unlike regions of the world where figuring out how to care for a rapidly aging population is already putting policy makers on the back foot, Africa has time. While there are halting signs that regional bodies like the African Union recognize the challenge ahead, on balance, however, the region remains unprepared, Ms. Aboderin says.

“Unlike what’s been happening in other regions where there’s a very explicit recognition that an aging population is a very serious development issue that requires planning and actions, this hasn’t yet been the case in sub-Saharan Africa,” she says. “On the whole, I think, it’s fair to say that at the national level issues of aging remain marginal, if they feature at all.”

For the Masalas, however, there is little question of the essential connection between its younger and older members. On a recent morning, some of the older children presented their grandmother with a song they had written about their lives. It was a haunting rap ballad, and unsurprisingly, she featured prominently.

“It’s a song about what we have been through and how, with the help of our grandmother, we have made something better from it,” says Ongezwa Masala, 15. “We’re singing about why we love her.”

This article was initially published on the Christian Science Monitor