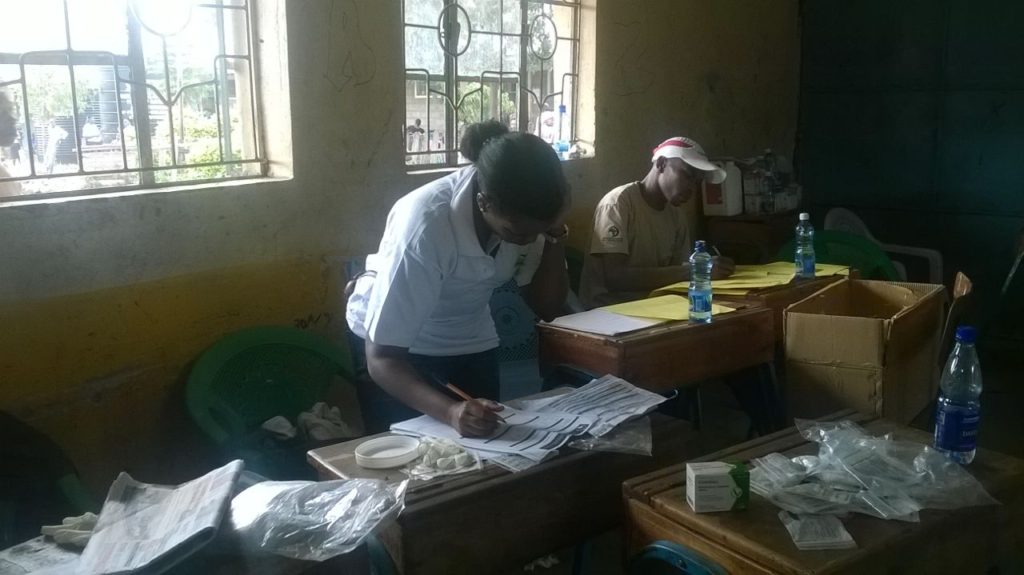 The weather on this particular Saturday looked so gloomy, like the heavens were just about to open up and I remember thinking, “Please, do not let it rain on the day of the medical camp.”

One way APHRC gives back to the communities in which it conducts research is by organizing free medical camps, during which residents are screened and treated for common ailments. In addition, family planning services and antenatal care are offered; patients are screened for TB and HIV, non-communicable diseases such as diabetes and high blood pressure. An estimated 1,000 people were seen over the course of the day in mid-May.

My colleagues and I arrived at the venue of the medical camp in Viwandani, an informal urban settlement of Nairobi, early on a Saturday morning to transform school classrooms into temporary medical consultation rooms. The school was busy with activity, and the community members had already started to line up. The excitement and hope on their faces was evident.

The young doctors from the medical school as well as the other health professionals were present in their gear ready for community service. There was a good representation from APHRC staff who took up their different volunteer roles with great zeal and commitment, from assisting with registration of patients, to ensuring order was maintained and that all things run smoothly.

I volunteered in the pharmacy, where I packaged tablets to be checked by the pharmacist to give to patients. I got to see firsthand how things are run in a pharmacy setting as well as helping out in getting the drugs ready for the patients.

Volunteers supporting the pharmacy during the Viwandani Medical Camp.

In the waiting area, patients’ blood pressure was measured before they were seen by doctors. Many were treated for one ailment or another. The queues seemed to grow longer by the minute and the volunteer medical staff went about doing all they could to serve as many people as possible.

Back in the pharmacy, there was much activity as patients had started coming in with their prescriptions. Soon the window where the drugs were being administered was packed up to capacity with young children, women, and men all struggling to get their prescription through to the pharmacy staff. The young doctors and pharmacists worked tirelessly to ensure that all the patients received the available prescribed drugs. Even with the crowd building up at the window, the pharmacists did not lose focus, and you could see the commitment in how they worked.

As the afternoon sun began to set, the crowds started to trickle out slowly from the medical camp with a satisfaction in their faces, happy to have been seen and treated and or referred to hospitals for specialized treatment.

I saw faces of exhausted but smiling health professionals and other volunteers at the end of the day. I can imagine they felt as I did– happy to have had the opportunity to help those who often forego medical treatment as an unaffordable luxury. And by luck, the rain that threatened the camp all day held off until the evening. It was a memorable volunteer experience that brought to mind Maya Angelou’s quote: “People will forget what you said, people will forget what you did, but people will never forget how you made them feel.”