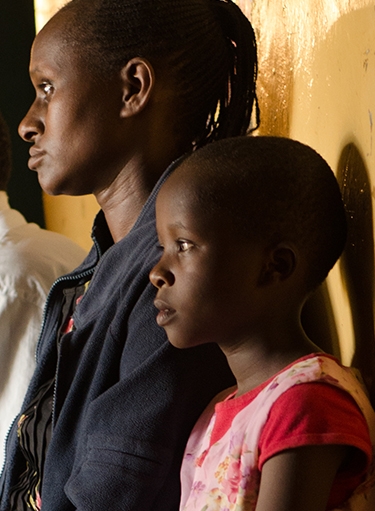 The Western and Nyanza regions of Kenya are known for their large families, and their populations have often been reluctant to embrace modern methods of family planning partly due to traditional norms. In fact the total fertility rate in these regions is 5.5, which is higher than the national average in Kenya which stands at about 4.6.

As a result of strong traditional beliefs, educating remote communities about family planning and providing family planning services is not always straightforward. In some families women are afraid to use family planning methods; particularly permanent methods, because of the fear the impact of not being able to have children could have on her status in her family and community.

In an effort to provide women with more information and opportunities to control the size of their families, APHRC, in collaboration with Marie Stopes Kenya, Family Health Option Kenya and Great Lakes University Kenya and (with funding from the Packard foundation), began a community-based family planning program in 2009 to gain a better understanding and address the complex drivers of high fertility in these regions of Kenya. The new initiative aimed to reverse the fertility trends by increasing the voluntary uptake of modern methods of family planning and over the long-term, reduce total fertility rates.

The story of Millicent; a 36 year old woman living in Western Kenya is an example of how the APHRC led initiative in the region is currently changing lives through providing new information and services to Kenyan women whose cultural beliefs and fears have barred them from seeking family planning services in the past.

Millicent is the first of the two wives of Mr. Bagero; a 42 year old businessman in Namuduru in Samia District in Western Kenya. To date Millicent and Benedict have had eleven children. The oldest is currently 12 years old and the youngest is just 2 weeks old. Millicent earns her living through subsistence farming on her two acre piece of land in Namuduru. Immediately after Millicent had her fourth child, Mr. Bagero wanted her to undergo a Bilateral Tubal Ligation (BTL), which is a permanent method of family planning, but Millicent refused.

“My husband had just married a second wife, if I underwent a BTL procedure and anything happened to my four children, I would be less than useless to both my husband and the entire community at large,” Millicent explained.

Children are a symbol of wealth among the Samia people. A childless woman who is past her mid-reproductive age is actually viewed as cursed.  Millicent believed that in the event that all of her children died, her co-wife who could still produce children would then have control over her in their polygamous family. She also feared she would fail in her responsibility as a wife.

Mr. Bagero and Millicent got married in 1997. The second wife; a subsistence farmer herself, joined the family eight years later. Before she attended any community health worker (CHW) talks, Millicent says she had always been against family planning. Mr. Bagero explained that he had only planned to have 3 children with his first wife.

When asked why she decided to conceive eleven children, Millicent said she felt that it was a way of punishing her husband who had married a second wife against her will. By having many children her husband’s attention and resources would be more directed towards her and her children.

As Millicent and her husband were taken through the various Family Planning methods, her husband openly preferred a BTL procedure for his wife but Millicent still had reservations. However, after counseling and advice from Prof. Richard Muga, who was running the health clinic, and speaking with the visiting program advisor Michelle Hawks, Millicent decided to undergo the Bilateral Tubal Ligation procedure.

The 18 minute procedure was performed by a Marie Stopes sponsored medical doctor at the Namuduru dispensary for free on the 18th October 2012. After the procedure, a visibly delighted Millicent was so relieved that she hinted to everyone at the clinic that the decision she had made would definitely reduce the arguments she frequently had at home with her husband. She admitted that she had last quarreled with her husband over the issue of family planning that very morning.

Although not all women decide to use family planning, providing women with the option and information to make important decisions about their own fertility is an important part of the work APHRC is doing in Western and Nyanza provinces of Kenya.