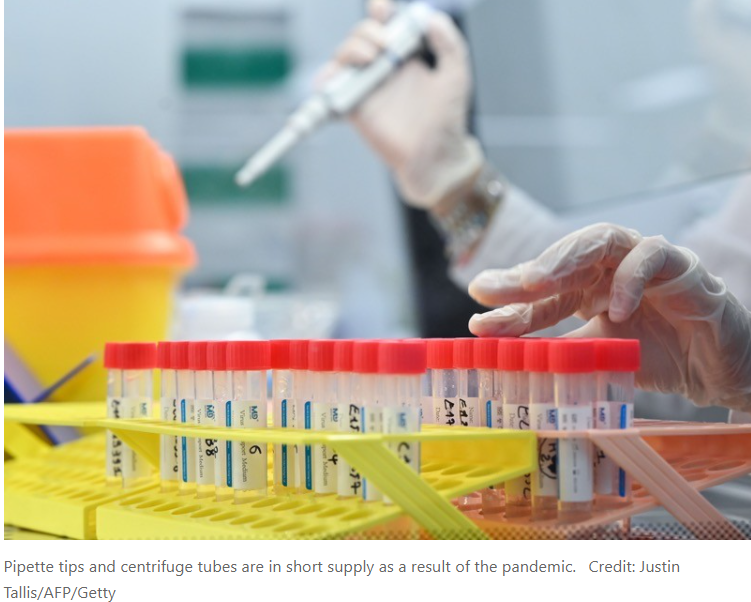 Does anyone have any of these?’: Lab-supply shortages strike amid global pandemic

Scientific labs worldwide struggle to find enough sterile gloves and other basics as supply and manufacturing chains break down.

Scientists around the world are scrambling to secure basic supplies in the wake of the COVID‑19 pandemic, which has increased demand for testing materials while disrupting manufacturing and distribution channels.

Shortages of gloves, plastic tips for pipettes, centrifuge tubes and other laboratory basics have caused projects to slow down or even stop, but researchers are adapting. “We’ve been calling around and finding solutions,” says Sebastian Rowe, a PhD student in chemical biology at Harvard University in Cambridge, Massachusetts.

According to the US Food and Drug Administration’s Device Shortage List, shortfalls of gloves, micropipettes, pipette tips and other supplies are expected to last for the “duration of the COVID-19 public health emergency”.

Border closures, quarantines and a drastic decline in shipping by sea and air has slowed the delivery of many types of supply and equipment, including some that aren’t directly related to COVID-19 treatment or testing.Collection: Coronavirus and scientific careers

In the United Kingdom, the National Health Service is warning of supply issues with products including gloves, pipette tips and refrigerators. In the case of one type of surgical glove, the shortfall is chalked up to “increased demand over recent months, production shortages and delays in packaging or sterilisation”.

According to a December report from the US International Trade Commission, the worldwide demand for gloves exceeded supply by about 200 billion by late 2020. In a demonstration of the far-reaching effects of the pandemic, one of the world’s largest producers of gloves, the Malaysian company Top Glove, based in Shah Alam, had to shut down some of its factories temporarily because of an outbreak of COVID-19 among workers.

Some labs are also reporting disruptions in supplies of lab animals. US pharmaceutical companies in particular are scrambling to find rhesus monkeys. The shortage, caused by increases in demand for vaccine testing and a ban on shipments of wildlife from China, has caused some research projects to grind to a halt and inspired calls to maintain a reserve supply of the animals.

Nasco Education, a scientific and educational supply company based in Fort Atkinson, Wisconsin, is phasing out sales of live African clawed frogs (Xenopus), which are used in the study of developmental biology. Company spokesperson Lori Jacoby explains that orders plummeted during lockdowns, making it less economically feasible to continue raising the frogs. The company has no plans to return to the live-frog business, but will continue to sell the animals for as long as its current supply lasts, which she says could be several months.

Rowe says that product shortages have been an issue ever since he returned to the lab in June 2020, after a couple of months of lockdown. The lack of supplies has changed how the lab conducts experiments. Before running through boxes of pipette tips on an assay, a researcher might first spend an extra day doing a pilot test to see whether the assay is likely to work. “You have to be better at planning your experiments,” says Rowe.

Victoria Forster, a cancer researcher at the Hospital for Sick Children in Toronto, Canada, ran into trouble in September when she couldn’t find the proper pipette tips or plastic plates for upcoming stem-cell experiments. As she explains, only certain tips will fit certain pipettes, making it hard to find alternatives. The wait for supplies set her back by about six weeks, she says. “I’ve worked in the UK and Canada, and [before the pandemic] I’ve never had to wait more than a couple of days for things like this,” she says. “I couldn’t start my experiment until I knew I had everything I needed.”

Supply shortages have also hit labs across Africa, says Evelyn Gitau, director of Research Capacity Strengthening at the African Population and Health Research Center in Nairobi. In some cases, researchers have tried to make do with alternative products, often with poor results. “There has been a proliferation of substandard lab equipment and lab consumables,” she says. “It’s counterproductive. If you’re going to send me a pipette that’s not fit for the purpose, you might as well have cancelled the whole experiment I was doing.”

The breakdown in African nations’ scientific supply chain underscores the danger of relying on countries outside the continent for equipment, Gitau says. If Kenya could improve its own manufacturing standards, she says, researchers there wouldn’t have to depend on supplies from the United States or Europe. “If I’m working with a virus right now, I wouldn’t wear a mask from Kenya,” she says. “Our Bureau of Standards is not doing the job that it should be doing, so we need to start pushing.”

The supply crisis could be an opportunity for countries to rethink their reliance on foreign suppliers, Gitau says. She suggests that Kenya could start by making use of abundant local resources. “We have potatoes rotting in the field that could be used to make filter paper,” she says.

The issue of foreign dependence isn’t limited to Africa. The US International Trade Commission notes that the United States imports almost all of its medical and surgical gloves, mostly from Malaysia. Imports of gloves into the United States increased by 17% from January to September 2020 compared with the same period in 2019, but it wasn’t nearly enough to meet demand. Similarly, the United States had to significantly increase imports of plastic labware in 2020.

Because of the shortages, labs are adopting a ‘reduce, reuse and recycle’ ethos. Under the right circumstances, centrifuge tubes can be reused, Rowe says. A tube that held cellular samples can, with enough scrubbing, be made clean enough to contain a buffer. And lab workers are using gloves for several days for non-sterile work. If they need to swap to sterile gloves for a particular experiment, they’ll often go back to the old pair when they have finished, he says.

As shortages continue, labs are cooperating. “E-mails are constantly going around,” Forster says. “Does anyone have any of these? Any of this?” She managed to get some much-needed pipette tips by swapping supplies with another researcher in Toronto. “That was a nice piece of camaraderie,” she says.

This article was originally published in Nature.