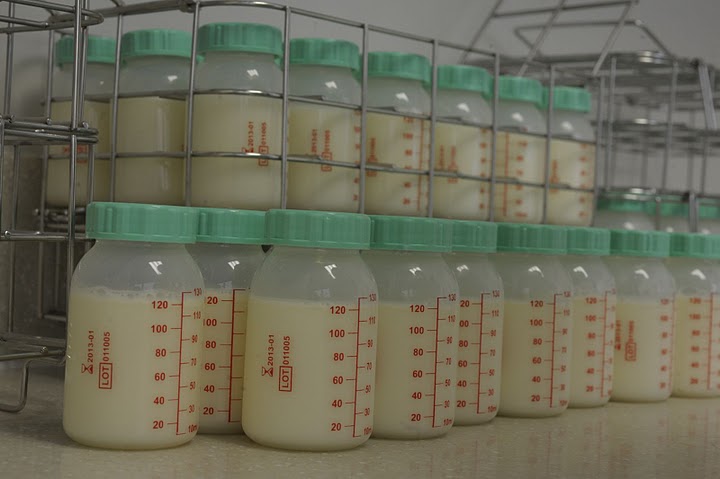 Banking on ‘White Gold’ to Save the Lives of Newborn Babies

Mother’s breast milk is a proven lifesaver. Optimal breastfeeding has the potential to prevent approximately 820,000 annual child deaths globally and is known to reduce the incidence of illness among children. In fact, the World Health Organization (WHO) recommends that newborn babies should be fed on breast milk only for the first six months of life. Breast milk is such a valuable resource that it has been dubbed ‘white gold.’

Sometimes however, babies are unable to access their mother’s breast milk. This could be for a variety of reasons, including abandonment or physical separation from the mother, maternal illness or even death of the mother. Typically, these babies, the majority of whom are sick, premature (born too soon) or low birth weight (too small for gestational age), are more likely to suffer from complications that are treatable with proven and cost effective interventions. Feeding these babies with formula or alternatives such as animal milk may not be cost-effective and may bring further complications like allergies, feeding intolerances and infections.  When breastfeeding is not an option, the WHO recommends use of donated human milk as a lifesaving measure for those babies who cannot access their mother’s breast milk. It is in this context that the WHO issued a global call to scale up the establishment of human milk banks (HMBs) for the provision of safe donated human milk and ensure timely access for at risk infants who need it.

Currently in Kenya, 22 out of 1,000 newborns die during the first 28 days of life which translates into approximately 40,000 deaths annually. In addition, an estimated 193,000 and 123,000 babies are born too soon and too small respectively. These are an unacceptably high figures for a country that prides itself in being a middle-income country. These numbers indicate that concentrated efforts are required to guarantee every newborn has a healthy start to life in addition to ensuring that the country attains the global target of less than 10 deaths for every 1,000 live births by 2035 as stipulated in the Every Newborn Action Plan.

Establishment of human milk banks can play a critical part in ensuring survival of vulnerable babies and reduce the country’s high rate of newborn deaths. This would be in line with the WHO call to scale up use of human milk banks to collect, store and distribute donated breastmilk.

To investigate the feasibility of developing a human milk bank in Kenya, APHRC in partnership with PATH and the Ministry of Health, Kenya among other stakeholders conducted an assessment of perceptions around donated breast milk. The assessment was done in Nairobi county and involved mothers, fathers and other community members, healthcare providers and policymakers.

The assessment showed that 99% of mothers had a positive view on breastfeeding. This is an important finding because if mothers know about the positive effects of breastfeeding, they may be more open to donating or obtaining donated human breast milk for their babies. While the concept of a human milk banking was new to most mothers, about 80% of them said they would donate their breast milk to a milk bank while over 85% of them thought that it was fine to feed children in need with donated breast milk.

Mothers and healthcare providers also expressed a number of concerns about the human milk banking concept, arising from cultural and religious beliefs and practices. The most commonly cited concern though was risk of disease transmission, especially HIV-AIDS. This highlights the need for awareness and education campaigns to address these concerns. It also goes without saying that systems should be put in place to minimize the risk of disease transmission through donated breast milk.

Experiences from other countries (mostly high- and middle-income) show that human milk banks can be a safe and cost-effective measure to ensure that more children access the benefits of breast milk. For instance, Brazil has set up over 220 human milk banks and has recorded healthcare cost-savings of $540 million annually. These savings are partially realized from the avoided costs having to treat newborns for illnesses or conditions that they may develop in the absence of their mother’s milk. Savings are also realized from shorter hospital stays and reduced use of expensive formula foods.

This initial study by APHRC in partnership with PATH and the Ministry of Health Kenya among other stakeholders shows that banks of ‘white gold’ would be acceptable in the Kenyan context. Human milk banks could hold the key to reducing the number of newborns who die within their first few weeks of life.

This story is based on the briefing paper, ‘Integrating Human Milk Banking with Breastfeeding Promotion and Newborn Care: is Kenya Ready?’ and the article, ‘Inside Kenya’s ambitious plan to build human milk banks.’