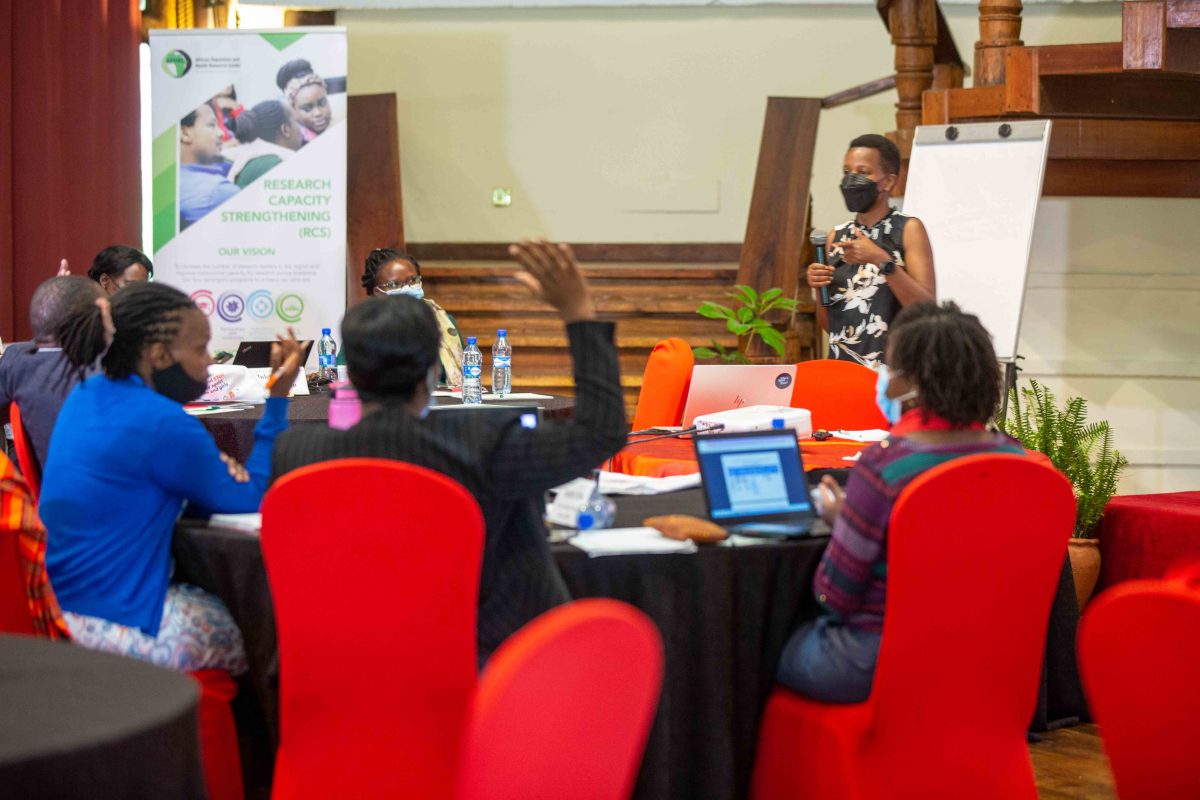 The Spotlight Initiative Africa Regional Programme has trained professionals from academia, civil society organizations and government in the art and science of using data to combat violence against women and girls (VAWG). The five-day capacity-strengthening workshop that took place in Nairobi was attended by over 30 participants from Ethiopia, Kenya, Malawi, Tanzania, Uganda and Zimbabwe. “We are working with the Spotlight Initiative to increase capacities to collect, use and analyze data,” said Dr. Caroline Kabiru, Head of the Head, Population Dynamics and Reproductive Health Unit at the African Population and Health Research Center (APHRC).

“The Program takes a multi-sectoral approach to respond to gender-based violence specifically violence against women and girls,” said Julie Diallo, the Gender Program Specialist for East and Southern Africa at the United Nations Population Fund (UNFPA) speaking about the program’s end goal.

The facilitators adopted an interactive method of training, tapping into the expertise within the room,  leaning more towards the experiences of the participants in their work around VAWG, gender-based violence (GBV), and sexual and reproductive health and rights (SRHR). Spotlight is a global initiative of the United Nations and is funded by the European Union. The workshop was organized by the implementing partners APHRC and the Population Council, Kenya with support from UNFPA and the United Nations Entity for Gender Equality and the Empowerment of Women (UN Women).

Research collaboration with the relevant government agencies is crucial as the initiative would like to see the evidence collected on VAWG informing policy decision-making, both at county and regional levels. Thus representation from the statistics bureau, the East African Community and the African Union were key during this training session.

“In order for statistics to be declared official by the national statistics department, it has to meet very specific criteria. One of these criteria is that it has to be nationally representative and to follow the recommended standards of official statistics and the basic requirements of good statistics production and research,” says Isabella Schmidt, UN Women’s Regional Gender Statistics Advisor for East and Southern Africa.

The facilitators gave presentations that took the participants through the best practices throughout the research cycle. Every step was covered from generating research questions, collecting the data, analyzing the research findings and disseminating them to both technical and non-technical audiences. The ethical issues to consider were also discussed.

“Violence against women and girls is a pandemic that we have to tackle. In order to fight this scourge, we need to have evidence-based information so that we can be able to actualize effective policies that would yield solutions,” said James Chawarika, a Research and Programming Officer at the Zimbabwe Gender Commission.

During the group sessions that took place daily, participants adapted the lessons to the context of their individual countries. The research environment plays a big role in determining the level of preparedness, the research process and the quality of data that is produced. There are countries where certain topics are taboo and therefore it was clear that researchers from those areas needed to handle these topics more carefully. This is in the choice of terminology and also in ensuring the researcher’s security while collecting data. For example, participants were encouraged to introduce surveys on VAWG using safe terms. For example, as a survey on women’s health or well-being. They were also informed about the importance of conducting interviews in private and developing cues for abruptly ending interviews if interrupted by the presence of a third party. Participants also discussed how to organize research teams and how to set in place quality assurance measures to ensure that quality data are collected.

During the final session at the workshop, participants discussed what to do with the data once it has been collected and analyzed. The facilitators emphasized the need for using research as a tool for change. According to APHRC’s Senior Advocacy Officer Jane Mangwana, the goal of the research project should be clear from the beginning and a strategy for sharing the evidence set as early as possible. “Determine who your target audience is. Understand their influence in driving policy and categorize them as either allies or abettors,” said Mangwana.

At the end of the workshop, participants expressed a renewed zeal for research. The participants whose research was at the inception stage said they will apply the lessons drawn from the workshop in their work. The training session also provided them an opportunity to network with researchers in different countries, a rich platform for knowledge exchange and peer learning.

According to Dr. Chrissie Thakwalakwa, the Acting Director at the Center for Social Research, University of Malawi, such fora will increase harmony in the research methods and data collected by researchers across the African continent. “Through these networks, we would like to see if we can improve incorporating  GBV indicators into our national Demographic and Health Surveys so we can all benefit and draw future data from this system. We would also be able to harmonize the data so that whatever data I collect in Malawi would not be too far from what is collected in  Kenya or Uganda,” says Dr. Thakwalakwa.

The participants requested regular training to further guide them in their research careers more specifically in the analysis and data use.