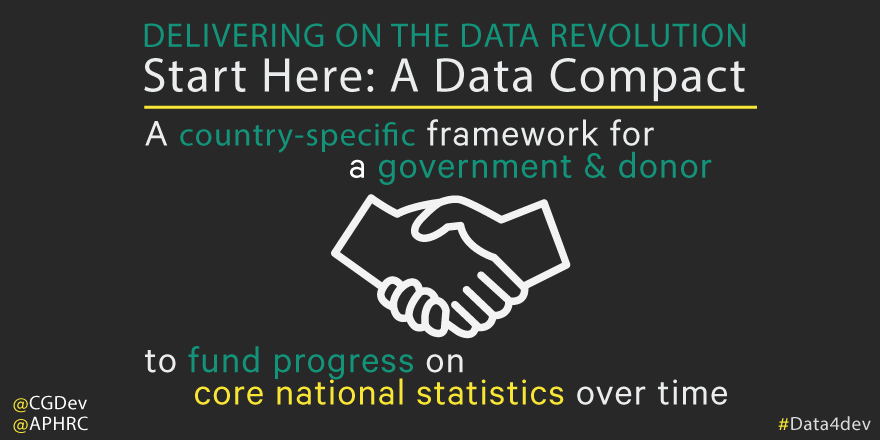 A revolution starts with a small, beautiful idea that ignites the imaginations and inspires action to a bold, new future. The vision: strong national statistics and data systems for decision-making at all levels of government for better, deeper, faster development.

The first step is improving what we call the building blocks of data as a bare minimum: records of birth and death; growth and poverty; taxes and trade; sickness, schooling, and safety; and land and the environment. To be valuable to policymakers, citizens, and donors and enable the cycle of accountability, these building blocks must be accurate, timely, disaggregated and open.

When the United Nations High Level Panel on Post-2015 Development Agenda called for a “data revolution” in its 2013 report, there were whoops of joy heard around the world. Finally, data nerds everywhere felt heard.  Something they had been grappling with for years was getting some big attention, and with it, renewed media—and donor– interest.

Since the recent data renaissance, there have been scores of meetings, conferences, panels aimed at trying to get at what this thing—the Data Revolution—is, especially in Africa. The advantage of so many meetings has been the regular opportunity to meet with thought leaders in conference rooms from Libreville to Abidjan to Addis Ababa to Johannesburg. But most of these meetings were at the global or regional level and have yielded little concrete action at the country level.

Last week, there was a small, quiet meeting in Nairobi. So, what’s new about that, right? Everyone thinks their meeting will be the one to catalyze action.

1 step forward for the Data Revolution

But maybe this meeting was just that little bit different. We gathered a dozen smart people who care about data and its importance for Africa’s development and deeply understand its political economy to talk about “what next” – and, most importantly, to make sure we were all using the same language when we talked.

With the leadership of directors general of National Statistical Offices like Zachary Mwangi of Kenya and Pali Lehohla of South Africa, along with other data revolution thought leaders, the group strategized on how governments can lead and achieve the data revolution with the support from non-governmental entities.

APHRC believes, like many, that lasting change in country systems won’t be driven by external forces—it has to come from governments. This idea forms the basis of the Africa Data Consensus , too; countries must own the prioritization, financing, and leadership of this revolution.

We think a Country Data Compact—a formal, country-specific, multi-year agreement – is the natural next step for governments and donors to fund progress on core national statistics.

So what’s the added value of Country Data Compacts? How are they different from what countries have already been doing to improve their national statistical systems?

Over the course of the year, APHRC and its fellow “revolutionaries”—Development Initiatives, Ushahidi, PASGR, and others – will be detailing what such a compact could mean for a country. As a guiding principle, we believe that delivering on a data revolution in Africa means forging a new relationship of accountability and cooperation among governments, their partners, and the producers and users of data.

Are you ready? We are. Read more at http://bit.ly/1lDfnXR.